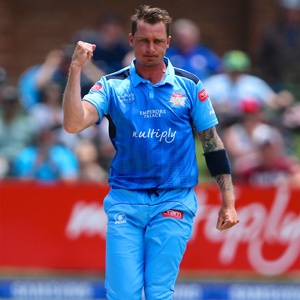 Cape Town - The Titans have decided not to play Proteas speedster Dale Steyn in their RAM SLAM T20 Challenge final against the Dolphins at SuperSport Park.

The defending champions, who boast several Proteas in their line-up, confirmed their final squad ahead of Saturday's final in Centurion with Steyn not featured.

It was reported last month that Cricket South Africa have kept a close eye on Steyn's fitness and stamina during the T20 competition.

READ: Steyn returns to Cape Town to work on fitness

Titans coach Mark Boucher revealed that by bowling only four overs a game, Steyn will "not get strong enough" come the Boxing Day Test against Zimbabwe.

Since returning from injury at the start of the tournament, Steyn has played five matches and has taken six wickets, which included a 2/16 against his former franchise, the Cape Cobras.

The 34-year-old has not played international cricket since November last year when he injured his shoulder while on Proteas duty against Australia in Perth.

Steyn needs just five more Test wickets to become the all-time leading wicket taker the Proteas in the longer format of the game.

He currently sits on 417 Test wickets while former Proteas all-rounder Shaun Pollock finished his career on 421, the current benchmark at national level.

The T20 Challenge final gets under way at 18:00 in Centurion.

We live in a world where facts and fiction get blurred
In times of uncertainty you need journalism you can trust. For only R75 per month, you have access to a world of in-depth analyses, investigative journalism, top opinions and a range of features. Journalism strengthens democracy. Invest in the future today.
Subscribe to News24
Related Links
Dolphins coach Morgan breaks new ground
Durban washouts: What CSA must do
Strauss rushes to wife’s side after cancer diagnosis
Next on Sport24
Bavuma, Nkwe delighted by Lions turnaround