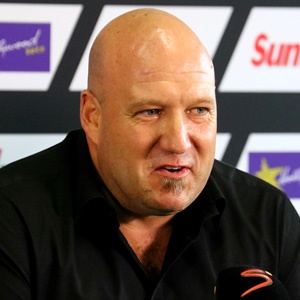 He flies with his family on Wednesday and is in his new surroundings from 4 August. De Wet was a surprise and a somewhat unknown quantity when he was appointed Dolphins Cricket CEO 18 months ago on a five-year contract.

With a strong marketing background, he had some definite ideas and gameplans to move forward with. In his short time, he will be remembered for giving Kingsmead a new facelift outside and inside, plus changing the Dolphins logo and securing a co-sponsor on a three-year deal, while not forgetting his part in bagging Kevin Pietersen for last season and the coming season’s Ram Slam T20 competition.

Like any business, there have been down sides, decisions that have caused resentment within and beyond the corridors of Kingsmead, leading to players leaving the franchise, active discussion on social media and probing questions.

The fact is, the game goes on and with a new head coach Grant Morgan in place and pre-season training already underway, it’s a case of the seeds having been planted and watered, ready to grow into something of substance.

De Wet’s new appointment is a classic tale of taking a chance with something and hoping for the best.

“I always had planned to look abroad after finishing my tenure at the Dolphins and had put my CV on a few international recruitment/employment agencies.

“I received regular updates on what was available and when the job in Napier came up, I thought it would be worth a go,” he said.

“It’s not often such opportunities arise and I submitted my details with the usual thought of not getting the job anyway, only to progress through the various procedures and ending up with one other applicant as the last two standing.”

Conducting interviews and presentations via Skype, De Wet secured the job and had to move forward, leaving the Dolphins for a new chapter in his business life.

“That’s how it’s worked out and it’s an opportunity I have to take. I have enjoyed my time at the Dolphins and have approached the job in a business frame of mind, making decisions and dealing with internal affairs within the structures of Dolphins Cricket,” he said.

“That may have made some folks unhappy, but sometimes there are matters that belong only in the workplace as such and do not need to be thrown about in the big world for everyone to feed off and arrive at opinions and conclusions.”

As of yesterday, De Wet had no inkling as to who is in the running as his replacement— he is obviously not part of the process — but he was impressed with Morgan’s work to date in getting a young squad prepared for the coming season.

“Pre-season training is well underway and quite intense. Some of the players have already said they have never had such focussed pre-season preparation and from my side, I get weekly updates and monthly schedules of what is planned, submitted by him without asking,” said De Wet.

“Any work to be done, functions to attend, he is first to put up his hand and first to arrive. He expects the same commitment from his players. He has some worthwhile ideas in making the players and franchise community friendly, getting recognition, that can only lead to a more solid following resulting in more attendance at matches.”

De Wet is confident the franchise will stand tall in seasons to come.

He will definitely return to Durban when he can as there is one major attraction he will never find in New Zealand.

“It will be interesting to see where the Dolphins are in a year’s time, after Grant’s first season.

“Others will be watching to see how he copes and I am sure he will attract new players, possibly get some to return,” said De Wet.

“As for me, of course I will return to Durban even if it is just for that one, unique to Durban experience, that famous Kingsmead curry.”