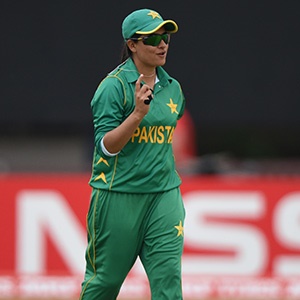 Former Pakistan women's captain Sana Mir announced her retirement from international cricket Saturday after a glittering career that saw her become the most successful female spinner in one-day international history.

Her rise dovetailed with the growth in sporting opportunities for Pakistani women, who were not allowed to play in open fields in the conservative Islamic country until the early 2000s.

"It gives me great satisfaction that I have been part of the great success stories for women's cricket," she said, according to a statement from the Pakistan Cricket Board.

She is one of only nine women cricketers to have taken 100 wickets and scored 1,000 runs in ODI matches.

But early this year selectors dropped her from the squad for the T20 World Cup in Australia, hinting that her career was nearing an end.

"It is the right time for me to move on," Sana said.

"I believe I have contributed to the best of my ability for my country and the sport."

We live in a world where facts and fiction get blurred
In times of uncertainty you need journalism you can trust. For only R75 per month, you have access to a world of in-depth analyses, investigative journalism, top opinions and a range of features. Journalism strengthens democracy. Invest in the future today.
Subscribe to News24
Related Links
West Indies 'flexible' over England tour as ECB weigh overseas offers
WATCH | SA sports stars pull together for #HealthyAtHome campaign
TOUR TALES: SA’s maiden Windies adventure, 1992
Next on Sport24
Faf admits Yasir Shah, reverse swing will be a problem