Morgan glad to see Rashid leave Ireland in a spin 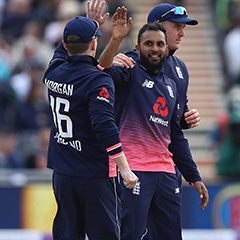 Rashid took five for 27 as Ireland, playing England in England for the first time, were shot out for just 126 in 33 overs during Friday's opening one-day international at Bristol.

Alex Hales (55) and Test captain Joe Root (49 not out) then saw England to their victory target of 127 for the loss of three wickets.

So lopsided was the contest, with barely more than half the day's overs -- 53 out of a maximum 100 -- bowled, there was no need for the standard 45-minute break between innings.

But it's one thing bowling to Indian batsmen renowned for playing spin, especially in home conditions, and quite another doing so against Ireland, for all that several members of their top order have English county experience behind them.

Friday saw the 29-year-old Rashid take the second-best ODI figures by an England specialist spinner, behind Vic Marks's five for 20 against New Zealand at Wellington in 1984.

That off-spinner Marks, who dismissed all of New Zealand's top five that day, including such noted batsmen as Bruce Edgar, Geoff Howarth, the late Martin Crowe, and his brother Jeff, accounted for a rather more distinguished quintet than Rashid was hardly the Yorkshireman's fault.

Victory left England 1-0 up in the two-match series, with Ireland needing to bounce back quickly if they are to avoid further embarrassment in Sunday's showpiece finale at Lord's.

"It was Adil's day today," said Morgan, England's Dublin-born ODI captain. "I thought he put in a magnificent effort with the ball.

"He had a tough winter and has learnt a huge amount to come back today with confidence to bowl his variations and show how threatening he can be."

Rashid defeated a succession of Ireland batsmen with the googly during his eight overs on Friday as he made life easy for the man-of-the-match adjudicator.

"You have good days and bad days -- it's how you deal with it," Rashid said. "It's a learning curve."

As for his googly, a delivery that turns towards a right-handed batsman rather than away as does a standard leg-break, Rashid added: "Some days you feel great, the googlies come out pretty hard to pick; some days they don't.

"When it doesn't I stick to the sliders or leg-spinners ... but some days it comes out exceptionally well, and then I have the confidence to bowl them."

On a ground with relatively short straight boundaries, England opted against playing two specialist spinners and left out Moeen Ali.

But with part-time off-spinner Root, a Yorkshire team-mate of Rashid, chipping in with two for nine from five overs, England had a useful back-up option.

"I think you find a lot of teams we come up against under-estimate Joe (as a bowler), and using him has worked for us -- probably more so in Twenty20 cricket," said Morgan.

Peter Chase's three wickets apart, there were precious few highlights for the visitors in a defeat made all the more acute by the fact it came with Ireland eyeing Test status.

"I'd never use the phrase out of (our) depth," said Ireland captain William Porterfield.

"We wouldn't necessarily have envisaged that spin would do the damage.

"Not taking anything away from Rashid, we should have played it a lot better.

"That's something we need to mentally put right for Sunday."