Cape Town - A superb six-wicket haul by Duanne Olivier and a commanding half-century from Zubayr Hamza has helped to even the contest on Day Two of the second unofficial Test between India ‘A’ and South Africa ‘A’ in Bengaluru on Saturday.

A rampant Olivier (6/63) took five wickets for just nine runs in the morning session as the hosts collapsed to 345 before Hamza’s commanding 125-ball 93 (15 fours) helped the tourists to 219/3 at the close of play, trailing by 126 runs in the first innings.

At the start of the day’s action, it was South Africa who got off to another brilliant start. The pair of Hanuma Vihari and Srikar Bharat could only add another 15 runs to their overnight score of 322/4 before Olivier clean bowled the latter for 34 (69 balls, 4 fours). It was soon six down for the home side, as Oliver struck late in the same over to removing Jayant Yadav for one. Anrich Nortje (2/69) then joined the party, claiming the prized wicket of Vihari for a well-played 148 (off 295 balls, 14 fours) leaving India on 340/7.

It didn’t take long for the visitors to wrap up the innings. Olivier’s outstanding spell continued, the right-armer removing Yuzvendra Chahal (1), Mohammed Siraj (4) and Ankit Rajpoot (0) for an added five runs.

South Africa went about chasing down the hosts’ lead in a controlled manner despite the early loss of Pieter Malan for a duck to Siraj (1/51) off the first ball of their innings. Hamza and opener Sarel Erwee combined for a 154-run, second-wicket stand. The partnership provided the ideal platform for the visitors as Erwee and Hamza brought up their 25th and 20th First-Class fifties respectively.

The breakthrough was eventually provided in the 37th over when legspinner Chahal (2/17) dismissed Hamza just seven runs short of what would have been a well-deserved century. The bowler proved the decisive factor once again with Erwee the next man to fall, trapped LBW for 58 (118 balls, 7 fours, 2 sixes).

With both set batsmen back in the changeroom, it was up to Rassie van der Dussen (18*) and Rudi Second (35*) to begin the rebuilding process for the visitors, as the pair notched up a 56-run partnership to see their side to 219/3 at stumps. 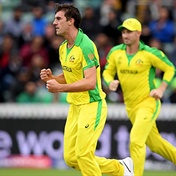