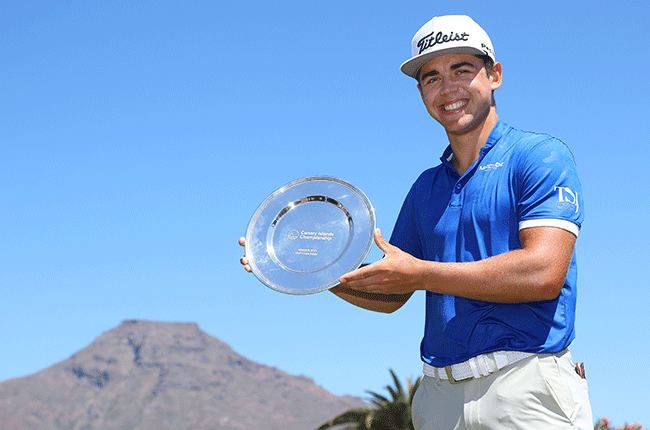 South African golfer Garrick Higgo was looking to shoot what would have been a staggering total haul of 30-under as he cruised to the Canary Islands Championship title on Sunday.

Higgo ended up posting a superb final round of 7-under 64, which included a hole-in-one, seven birdies and two bogeys to finish on 27-under par for the win.

The 21-year-old was two strokes short of Ernie Els' European Tour record score of 29-under, as he bogeyed the par-3 16th and parred the final two holes.

Speaking to reporters following his six-shot victory at Golf Costa Adeje, Higgo admitted that he was aiming to score 30-under.

"My goal was to try and get to 30-under, so when I bogeyed 16 I was a little upset about that," said Higgo.

"I watch scoreboards all the time, so I knew exactly where I was, but I didn't know about the record (Ernie Els' European Tour score)."

Higgo powered to his second win in only three weeks after lifting the Gran Canaria Lopesan Open title last month.

It was Higgo's third European Tour win in just his 26th event, making him the fastest South African to three wins (not including Majors and World Golf Championships).

"It is unreal. I can't believe it has happened so quickly again, but my game has been good so I can believe it as well," said Higgo.

"It feels good. I have been working really hard on a lot of little things and I have also accepted what works for me and kind of stuck with that. I think that has been a big thing."

Higgo had a day to remember as he also recorded his first professional hole-in-one on Sunday.

Hitting a nine iron at the 166-yard par-3 seventh hole, Higgo's ball hopped twice and found the bottom of the cup.

"It was a perfect number for a nine iron, I knew I had to hit a full one though. When I hit it, it came off really hot, so I was hoping it was going to go long and then I saw one bounce and then it just disappeared," said Higgo.

"I didn't know it had gone in, I thought it might have been long, but then someone behind the green started screaming, so we knew it was in."

We live in a world where facts and fiction get blurred
In times of uncertainty you need journalism you can trust. For only R75 per month, you have access to a world of in-depth analyses, investigative journalism, top opinions and a range of features. Journalism strengthens democracy. Invest in the future today.
Subscribe to News24
Next on Sport24
SA's latest golf prodigy Garrick Higgo powers to historic victory on European Tour