Woods keen to be playing captain at Presidents Cup 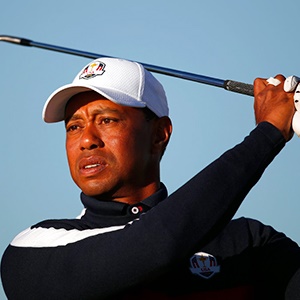 Melbourne - Tiger Woods said on Thursday he was keen to be a playing captain at next year's Presidents Cup, and he will draw on his recent Ryder Cup experience to help him out.

Woods will captain the US in the 2019 edition of the match play team event at the Royal Melbourne - Australia's oldest golf club - with Ernie Els captaining the Internationals.

The former world number one made a successful return to golf this year after missing most of the previous two seasons through injury.

It has propelled him to 14 in the world from outside the top 500 and he wants to ensure he is among the eight top-ranked Americans who will gain automatic selections for next year. If not, he could still play as one of four wildcard picks made by himself in consultation with his vice-captains.

"I'm part of the team either way, okay. We'll have our top eight guys, and hopefully I'll be part of the top eight," he said in Melbourne where he is scouting out the course layout.

"If not, then myself and my vice-captains are going to have to figure out as well as the other top eight players who are the next four guys that will be best served to be part of this team."

But he made clear he wanted to play at an event he has been part of for 20 years. "I want to compete. I want to play," he said.

"Being a vice-captain the last couple years, you realise you really don't control the play.

"You have to sit back and watch. And as a player and as a competitor, you want to always be in control and be able to compete and play."

Woods was initially picked by captain Jim Furyk to be a vice-captain at this year's Ryder Cup, but he dropped out of the role after forcing his way into the team as a player.

But he said the early preparation for being a vice-captain would bode well for his potential dual role in Melbourne.

"I had a lot of prep about being a vice-captain and being a player, and I was part of a lot of those conversations about who should be part of the team, all the group texts that we were trying to figure out," he said.

"Now fast forward to next year, I'll be a captain, so I'm going to have to defer a lot of information to my vice-captains and get a lot of their opinions and also my team, whether or not I can play and do both roles."

Woods added that he was tossing around a few names to be his vice-captains, and he would make a decision "shortly".

The US team won the last Presidents Cup in Jersey City in 2017 by 19-11, their seventh straight triumph.

The only win by the Internationals in the biennial event's 25-year history was in Melbourne in 1998, when Woods was on the losing side.

We live in a world where facts and fiction get blurred
In times of uncertainty you need journalism you can trust. For only R75 per month, you have access to a world of in-depth analyses, investigative journalism, top opinions and a range of features. Journalism strengthens democracy. Invest in the future today.
Subscribe to News24
Related Links
Magnificent amateur-7 primed for SA Open
Grace has a Major incentive in this week's SA Open
Frittelli embraces favourite tag at SA Open
Next on Sport24
Thomas contacts sponsors, to undergo training programme, after anti-gay slur