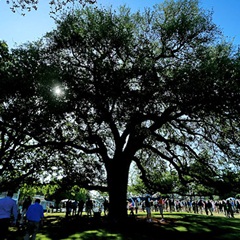 Augusta - Augusta National's famous 18-hole layout consists of some of the best-known holes in the world of golf and an array of tantalising and challenging shots.

Here are five of the key shots players must negotiate if they are to win the Masters:

A slight dogleg right that plays uphill. A bunker right and trees left must be avoided if the optimum position to hit a tricky second shot onto an severely undulating green is to be secured. Nerves can jangle on the first tee with big crowds and the Masters mystique.

The longest and toughest of Augusta's National's four par-threes. The length, cavernous protecting bunker in front of the green and the difficulty of gauging the wind direction around the green from the the vantage point of the tee all conspire to make the hole a stern challenge. There's only been one hole-in-one here in Masters history - Jeff Sluman in 1992.

Regularly rated as the toughest hole on the course, the key to the snaking 11th is the long approach shot. A pond guards the green left and a bunker centre-right. It's the start of the famed Amen Corner trio of holes and shifting winds at the bottom of the course add to the difficulties of hitting the green in two.

A classic risk-reward hole, the green is reachable in two on the back of a good drawing drive down a fairway bordered by hundreds of flowering azaleas. But it's a gamble for players with their second shots as they try to dissect Rae's Creek in front and deadly bunkers behind, and eagle hopes can turn to bogey despair in a matter of seconds.

One of the most famous finishing holes in golf and one of the most daunting off the tee with towering pines on both sides presenting a narrow corridor to hit through to find the safety of the fairway. Forms one of the two playoff holes along with the 10th and the heightened stakes makes it an even tougher prospect

Related Links
Masters by the numbers
Day, Spieth line up for Masters showdown
Mickelson ready to be a Masters threat
Share
Next on Sport24
Can Augusta cope with the 'Incredible Bulk'? Golf talking points