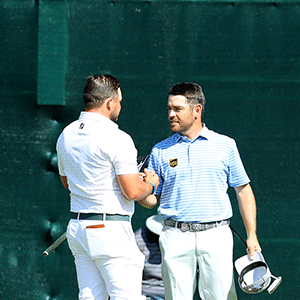 Sun City - Louis Oosthuizen says that he wants to put pressure on tournament leader Zander Lombard heading into the final round of the Nedbank Golf Challenge.

Oosthuizen carded a 1-under 71 to sit tied for second alongside Belgian Thomas Detry at 10-under par after the third round.

And with just one shot separating them, the 2010 Open Championship winner wants the youngster to know that he will be breathing down his neck.

"I need to give myself more chances on the greens and get decent chances for birdies ... and try put a little pressure on him and just keep in play," Oosthuizen told reporters on Saturday in Sun City.

SA's top ranked golfer was treated for kidney stones on the eve of the tournament and despite feeling discomfort on Friday, Oosthuizen stated that he had no issues on the golf course on Saturday.

"My body is feeling great, I had a great rest last night and I felt great this morning so no issues there. I just need to play better," he said.

Only 10 South Africans have won the 'Africa's Major' and Oosthuizen is eager to write his name down in the history books.

"This is a tournament growing up as a kid you watched and wanting to have your name on that trophy," he said.

"It would mean a lot but I need to play a bit better tomorrow."

Leading scores after the third round of the European Tour's Nedbank Golf Challenge on Saturday at the par-72 Gary Player Country Club in Sun City (RSA unless noted):