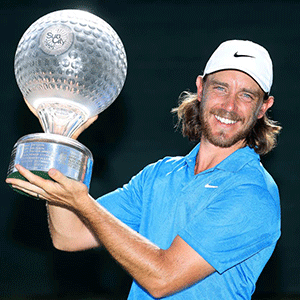 Cape Town - Tommy Fleetwood joked that his win at the Nedbank Golf Challenge has avenged England's 32-12 loss to the Springboks in the Rugby World Cup final.

The Englishman defeated Sweden's Marcus Kinhult in a thrilling playoff to win at Sun City on Sunday.

Fleetwood started the final round six strokes off the lead but flew up the leaderboard after making three eagles and three birdies to finish on 12-under par.

On the first playoff hole, Kinhult had to settle for a bogey while Fleetwood made par to claim his fifth European Tour title.

When asked what it means to win in South Africa for the first time, Fleetwood joked that his win was a "token gesture" to England fans after their World Cup final loss to the Boks last month.

"It's a little bit of revenge for the World Cup but it's a token gesture. No, it's very very cool (to win here), it's such an historical event," Fleetwood told reporters.

"I'm looking forward to coming back. It (this win) is definitely going to bring me back."

Fleetwood confessed that it was an emotional win for him following a frustrating season without collecting any silverware since January 2018.

"I'm more emotional for the people around me... You just wait for so long to come and you feel like you've done so many things but winning is all we want to do and it just gets to you when you done it," said the world No 10.

"It does feel good, it's been a long time coming... I've been close so many times and have let it go a couple of times. We've won now and I'm happy about that now."

Fleetwood will be in Dubai this week for the European Tour's finale, the DP World Tour Championship.

TOMMY WINS!!!!!! Englishman Tommy Fleetwood has won the Nedbank Golf Challenge with a playoff victory against Marcus Kinhault. Here is his putt that made him lift up the crystal trophy! #NGC2019 @golfatsun pic.twitter.com/shIzgN3c9d