Tiger Woods (AFP)
Gullane - Graeme McDowell is one of golf's hottest players at the moment but he was simply blown away by the performance of playing partner Tiger Woods in the opening two rounds of the British Open.

According to McDowell, the world number one is striking the ball so well that he could be in line to end a five-year wait to grab the 15th major victory of his career.

Woods carded a level-par 71 in Friday's second round and is hovering in the shadows of the leaders on 140, two under par.

"The last couple of days...I've been sitting back in amazement at how good he's been playing," said McDowell after he also returned a 71 for 146.

"He takes you out of your zone a little bit because you find yourself paying too much attention to what he's doing.

"He's pretty much the best player ever and he's played exceptionally well the last couple of days and is going to be tough to beat this weekend," said McDowell in a Q&A as he poured drinks for golf fans in the MasterCard club at Muirfield.

Some golfers find it awkward playing alongside Woods because of the ballyhoo that surrounds the 37-year-old American and McDowell said the experience served up plusses and minuses in equal measure.

"There are good points and bad points," said the Northern Irishman who has won three times this season.

"The good thing is there is plenty of attention and plenty of crowds and that certainly focuses your mind.

"Tiger is a great player, he's very complimentary and he's good to play with (but) there's a lot of commotion inside the ropes...plenty of cameramen, sound microphones and media and there's so much stuff going on.

"It takes a little bit of time getting used to that but I've played with him so much I'm pretty comfortable with that now," he said of Woods who has four victories to his name this year.

McDowell explained there were times in the recent past when the off-the-course activities surrounding Woods made it slightly uncomfortable for his playing partners.

"There was a period there for a few years when, like, what are you going to say to him, 'How's your love life?'," the world number seven said to howls of laughter.

"But he's a great lad and he's great to play with. We have got on well for the last couple of years and I enjoyed it today." 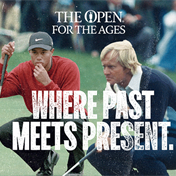