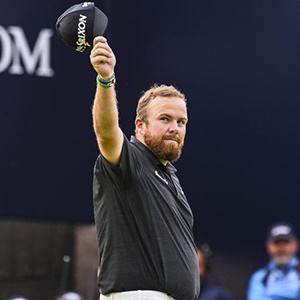 Portrush - Ireland's Shane Lowry withstood howling gales and a bogey at the first to stretch his lead of the Open Championship to six shots through 10 holes and move closer to his first major victory on Sunday.

Roared on by huge crowds despite the inclement weather at Royal Portrush, Lowry had a nervy start but crucially holed a tricky putt to avoid dropping two shots at the opening hole.

The 32-year-old then streaked further clear with three birdies in four holes between four and eight to move to 18-under.

But two bogeys at eight and nine slowed Lowry's charge towards the Claret Jug and gave his closest challenger Tommy Fleetwood an outside chance with rain hammering down on Northern Ireland's north Atlantic coast.

Fleetwood is two-over for his round after missing a number of key putts to put the pressure on his playing partner.

However, it looks set to be a shootout between those two for a first ever major with the terrible conditions hampering the chasing pack's chance to post a challenging score.

Lee Westwood is on course for his 10th top-three finish in a major without ever winning one as the Englishman stands at eight-under after 12.

World number one Brooks Koepka was hoping for the wind to blow Lowry off course, but it was the four-time major champion whose chances were washed away early on.

Four consecutive bogeys on one, two, three and four realistically ended his challenge for a first Open Championship.

The American recovered with eagle at the fifth to turn at seven-under alongside Rickie Fowler and Danny Willett.

We live in a world where facts and fiction get blurred
In times of uncertainty you need journalism you can trust. For only R75 per month, you have access to a world of in-depth analyses, investigative journalism, top opinions and a range of features. Journalism strengthens democracy. Invest in the future today.
Subscribe to News24
Related Links
Lowry on brink of breakthrough Open win
LIVE: 148th Open Championship - Round 4
Herman holds onto 1-shot Barbasol Championship lead
Next on Sport24
British Open organisers announce revised qualifying format