DeChambeau struggles in first round of Tour Championship 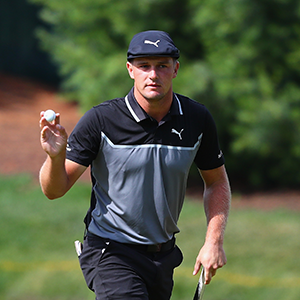 Atlanta - Bryson DeChambeau is under threat of losing out on capturing the FedEx Cup title after a horror opening round in his Tour Championship debut on Thursday in Atlanta.

DeChambeau, 25, is predicted to now finish No 3 on the standings after posting two double-bogeys in an eventual 71 in heatwave conditions on the East Lake course.

The Florida golfer heads into day two of the season-ending event six shots adrift of the leading duo of Tiger Woods and Rickie Fowler.

Woods saved the best for last in holing a near 30-foot eagle putt at the last and is projected to jump 18 places to No 2 on the FedEx Cup standings.

World No 1 Justin Rose, who birdied his closing two holes in a score of 66 to be tied third, is projected to move up a place to No 1 on the FedEx Cup.

DeChambeau parred his opening three holes but sent his drive at the fourth well right onto the adjoining fifth fairway, but then taking four shots to get up-and-down from some 40 feet shy of the flag.

He managed the first of three birdies at the sixth hole but was again struggling in having to take a second stroke penalty drop from an unplayable lie.

To his credit, DeChambeau regrouped to play the inward nine in three-under par.

"It was a round of two halves, for sure," he said.

"First off, the rough is brutal out there. I've never encountered something that thick. It's a zoysia and Bermuda blend, and new conditions for me again.

"It just seems like that's been the story these past couple events I've played in. It's really just put me not in the greatest plays.

"But hopefully I'll learn from it and not hit as many errant tee shots.

"If I get my game going, if I get my driving in the right direction, watch out."