Koepka warns he can 'get even better' 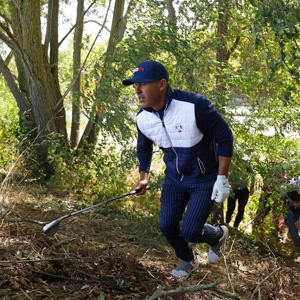 Shanghai - Brooks Koepka has won half of this year's majors and is golf's newly anointed world number one, but the red-hot American insists he can get even better as he leads an elite field into this week's WGC-HSBC Champions.

The 2018 US PGA Tour Player of the Year is the man to beat in Shanghai after he coolly shot a final-round 64 to clinch victory in the CJ Cup in South Korea last week and ascend to golf's top ranking for the first time.

"The way I'm playing right now, I feel like I can win anywhere," said Koepka - a joint runner-up in Shanghai last year - ahead of the $10 million event which begins on Thursday.

"I don't feel like I've peaked at all. I feel like I can get a lot better. You can always improve.

"With maturity, coming out on the golf course you learn new things about yourself every day."

The 28-year-old, who combines a powerful game with a cool demeanour, said he feels "no pressure" after rising to the top ranking.

Chasing him is the usual who's who of star names drawn annually to Sheshan International Golf Club for the tournament dubbed "Asia's major" which carries a winner's purse of $1.8 million.

Also on hand is the "Moli-Wood" duo of Francesco Molinari and Tommy Fleetwood, who provided the spark for Europe's dominating Ryder Cup win, along with several of their team-mates.

Johnson memorably imploded last year in the final round at Sheshan, surrendering a six-stroke lead compiled through 54 holes and opening a door that Rose barged through to win.

The long-hitting American said that was history.

"I didn't play that badly. I just hit a couple of iron shots that cost me the tournament," said Johnson, who lifted the trophy at Sheshan in 2013 with a WGC-HSBC Champions record 24-under par total of 264.

"That's just golf sometimes. You've got to take it, learn from it and move on."

Koepka and Johnson are noted friends, but reports emerged of a bust-up between the pair after the Ryder Cup defeat last month, shining a spotlight on their participation in Shanghai.

They were chummy at a tournament launch event on Tuesday night and Johnson said the pair remained "best buddies" while brushing off the reported rift.

"It was absolutely nothing and people made a lot bigger deal out of it than what it was," Johnson said.

Koepka is the fourth golfer this year to rise to world number one, the first time that has happened since 1997 and illustrating the startling depth of talent in the game.

Rose warned that Koepka was "looking fresh" after his win in South Korea, at a time when many players are drained from travelling across the globe to the region after an intense season.

"(Koepka) is getting his due now. It's been a real breakout year for him," Rose said.

"The style in which he is doing it is impressive. He plays a very aggressive game and when he's on, he's hard to beat."

Both Rose and McIlroy confessed to some fatigue after their long journey to China and were wary of jet lag.

"You don't know how good you'll be until you get out there on Thursday, but my game feels pretty sharp," McIlroy said.

"I've played well here. I've had some really good finishes, I just haven't had the win. So hopefully this is the year."