Ashleigh Buhai of South Africa reacts to missing a putt on the second playoff hole to lose the Portland Classic at Columbia Edgewater Country Club in Portland, Oregon on 20 September 2020.
Steve Dykes/Getty Images

Both players found the fairway at the second playoff hole, the par-four first that was the second-toughest on the Columbia Edgewater course on the day.

Both saw their approach shots land in the rough behind the green and had to pitch on. Hall made her five-foot par putt to pile the pressure on Buhai, who missed her short-range effort.

England's Hall, who added a second victory to the British Women's Open title she claimed in 2018, had a one-stroke lead going into the 72nd hole, but bogeyed the last to fall into the playoff.

Buhai, a three-time winner on the Ladies European Tour, had stormed home, making four of her eight birdies in the last five holes in a seven-under-par 65.

That included a birdie at the 72nd hole to cap a seven-under par 65 that saw her in the clubhouse on 12-under 204.

Hall was 13-under heading to 18 thanks to two three-birdie bursts at the fifth, sixth and seventh and the 10th, 11th and 12th.

But she dropped a shot at the 72nd hole and the pair returned to the 18th tee to start the playoff.

Hall found the fairway at the first playoff hole, where Buhai was in the rough and put her shot out on the fringe.

Hall two-putted from about 12 feet and Buhai matched her par.

It was an emotional win for Hall, who said she didn't realize where she stood at the final hole of regulation because the scoreboards that normally dot the course haven't been put up with no fans in attendance because of the coronavirus pandemic.

"I bogeyed the last hole, I was quite upset about that," said the 24-year-old, who nevertheless regrouped admirably.

Thailand's Moriya Jutanugarn and American Yealimi Noh shared third place on 205. Jutanugarn carded a 67 and Noh had a 69.

South Korean star Park In-bee closed with a 66 to head a group on 206 that also included overnight leader Mel Reid of England - who took a two-stroke lead over defending champion Hannah Green into the final round in search of her first LPGA title but carded a two-over par 74 to drop back.

The tournament was reduced to 54 holes because of poor air quality in Portland earlier in the week due to wildfires in the US West.

We live in a world where facts and fiction get blurred
In times of uncertainty you need journalism you can trust. For only R75 per month, you have access to a world of in-depth analyses, investigative journalism, top opinions and a range of features. Journalism strengthens democracy. Invest in the future today.
Subscribe to News24
Related Links
Bryson DeChambeau wins US Open to capture first major victory
Rory McIlroy likes his US Open chances after strong 68
England's Reid rolls to LPGA Portland lead
Next on Sport24
Golf legend Jack Nicklaus explains decision to vote for Donald Trump 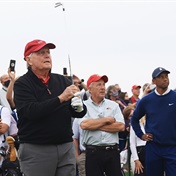