Spieth goes for the Grand Slam 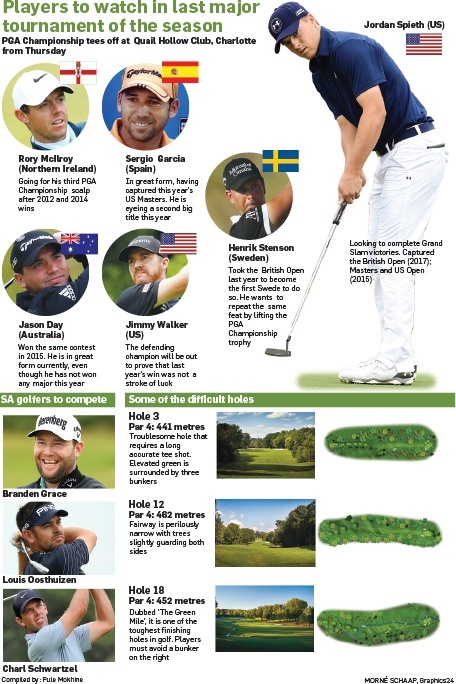 Johannesburg - Fresh from becoming the second youngest player in history to win three legs of the career Grand Slam after a victory at The Open championship last month, Jordan Spieth gets a chance to collect the only major he is missing, the PGA Championship.

The fourth and last big tournament for this year tees off at Quail Hollow Club in Charlotte, North Carolina, on Thursday.

Winning at Quail Hollow will earn Spieth the honour of being the youngest golfer in history to capture four majors – clipping Tiger Woods by a little more than eight months.

With his British Open triumph at Royal Birkdale last month, Spieth joined the legendary Jack Nicklaus as the only player to take three legs of the Grand Slam before the age of 24. He only turned 24 on July 27.

The second-best golfer in the world is currently enjoying a good run on the course. He beat Matt Kuchar by three shots to take the Claret Jug.

But Northern Ireland’s golden boy, Rory McIlroy, is also expected to show his class during the event to prove that he has what it takes to be victorious.

This week, McIlroy parted ways with JP Fitzgerald, his caddie of nine years, due to differences over club selection, among other things.

His golf bag is now carried by Harry Diamond, the man who will guide him at the championship.

There will be an array of other top golfers out to show their mettle and hoping to make a mark at Quail Hollow.

South Africa will have Branden Grace, Charl Schwartzel and Louis Oosthuizen competing at the event.

With no Mzansi golfer having won any PGA Championship since its inception, it would be great to see one of the golfers do the country proud.

Grace impressed at The Open by becoming the first golfer in the history of the event to score eight under par 62 in the third round. This was the lowest round of golf registered by a player in this event.

Will Grace repeat the same feat in North Carolina and win the championship, which carries a prize purse of a whopping $10.5 million (R139 million)?

As is the norm, the course will not be an easy walk for competitors – Quail Hollow has been designed to give the them a run for their money for the duration of the event.

It will be interesting to see who comes out on top.