Crash course for US as Ryder Cup approaches 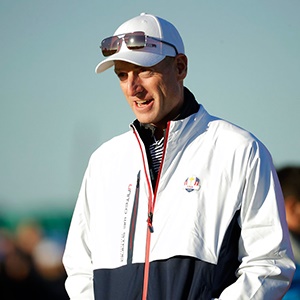 Saint-Quentin-en-Yvelines - US captain Jim Furyk admits his team are facing a race against time to grow accustomed to Le Golf National as the 42nd edition of the Ryder Cup swings into view.

Furyk counts nine major winners - including a revitalised Tiger Woods - in his 12-man team, but only half of those players have experience of the challenging Albatros course, where precision and control are paramount.

"They are just trying to learn the golf course," Furyk told reporters on Tuesday. "I said yesterday, one of our keys, really, would be these three days of prep, Tuesday, Wednesday, Thursday.

"I've got six guys that have seen the course, six that haven't."

Familiarity with surroundings is unlikely to be a problem for European captain Thomas Bjorn, with Tyrrell Hatton the only member of the team yet to record a top-10 finish at Le Golf National.

"Europe knows this golf course well. They have played the French Open here," said Furyk. "We're trying to figure out the setup and what they have in store for the week. The three days are important."

Both sets of players completed a full practice round on Tuesday, only 24 hours after the majority touched down following the conclusion of the Tour Championship at East Lake, where Woods clinched his first victory in 1 876 days.

Woods is playing at the Ryder Cup for the first time since 2012, a tie for sixth at this year's Open and a runner-up finish at the US PGA Championship convincing Furyk to select him as a captain's pick.

"I was trying to make the team this year. I was going to be here anyway," said Woods, who attracted a large following throughout practice.

"At the beginning of the year, Jim asked me to be vice-captain. To have now earned my way on to the team to have not only the vice-captains but all the players who want me on the team, because I was picked; that means a lot to me.

"I felt like I've played well enough but I still have gotten the nod from our captain, vice-captain, and as well as the players, and so it just feels great to be part of this team."

His Ryder Cup record makes for sorry reading, a 13-17 record with three halves has seen him emerge on the winning side just once in seven attempts.

Phil Mickelson has fared little better going into his 12th successive Ryder Cup as a winner on only three occasions, but the 48-year-old - the oldest player competing this week - hasn't lost any appetite for the competition.

"You would think that you would get kind of desensitised to it, but I have come to love and cherish being a part of these weeks even more," said Mickelson.

"And this week, especially, with the amount of not just talented players, but quality guys that are on our team, being with them has been so special and fun."

Denmark's Bjorn can call upon the last two winners of the French Open - Alex Noren and Tommy Fleetwood - as Europe hunt a sixth straight win on home soil, a streak that dates back to 1997.

"This golf course is very similar to what we are used to when we come here, and that's probably more the thing that I like," said Bjorn.

"There's guys on this team that's played a lot of French Opens. I don't want them to show up and it's a completely different golf course to what they are used to. This is very similar to what it is normally."