Johannesburg - Sun International announced on Sunday that it has appointed Kenneth Payet to the position of tournament director of the Nedbank Golf Challenge.

Payet will replace the late Dan Sevel, who tragically passed away last week after falling to his death.

Payet is no stranger to Sun International, having joined the company in 1993. He also held the position of Director of Golf at Sun City between 2002-2007.

Payet left to manage the Pecanwood Golf and Country Club before joining Steyn City Properties in 2011, where he oversaw the initial construction of the golf course and managed operations.

He returned to Sun International in 2017 as Operations Manager for Sport & Recreation at Sun City, and assisted in organising the 2017 Nedbank Golf Challenge tournament.

"Ken's wealth of experience and his commitment and passion for golf will serve the tournament well. We congratulate him and wish him well with this year's Nedbank Golf Challenge," said Sun International CEO, Anthony Leeming.

The Nedbank Golf Challenge is hosted by SA golfing legend Gary Player and is the penultimate event on the European Tour's Race to Dubai.

The $7.5 million tournament will get under way from November 8-11 at the Gary Player Country Club.

We live in a world where facts and fiction get blurred
In times of uncertainty you need journalism you can trust. For only R75 per month, you have access to a world of in-depth analyses, investigative journalism, top opinions and a range of features. Journalism strengthens democracy. Invest in the future today.
Subscribe to News24
Related Links
Molinari wins remarkable Open Championship
Indian Sharma revels in best birthday ever at Open
Palmer makes dramatic breakthrough in Kenya victory
Next on Sport24
Merrick Bremner tames 'tough' Wild Coast for 7th Sunshine Tour title 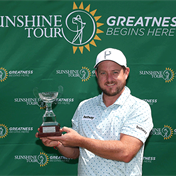