To open or keep golf courses closed? Some of the changes golfers will encounter

There's been a plea from golf-playing South Africans to open golf courses around the country during the nationwide lockdown.

From 1 May, South Africa moved to lockdown Level 4, which allows its citizens to participate in outdoor exercise - excluding golf - limited to between 06:00 and 09:00 within a 5km radius of their home.

Former Proteas batsman Herschelle Gibbs caused a stir on Twitter when he suggested golf courses should be opened if public transport is made available.

"If public transport is fine surely golf courses can be opened, just no sitting around at clubhouse after the round. Better than nothing," he wrote.

On Thursday, President Cyril Ramaphosa revealed that most of the country will drop to Level 3 by the end of May, but some parts with higher infection rates of Covid-19 will remain at Level 4.

Level 3 involves the easing of some restrictions, including social activities.

According to the BBC on Wednesday, in England the government eased lockdown measures pertaining to recreational sport with golf courses reopening across the United Kingdom.

However, governing bodies in England formulated various protocols to make sure that golf was safe amid the coronavirus restrictions.

Here are some of their new restrictions (according to BBC Sport):

- When teeing off, your playing partner needs to be 2m away

- No more than four people are allowed on the putting green

- Rakes have been removed from courses, with players needing to smooth over the sand with their feet

- Courses have decided to fill the hole (see image below), which prevents golfers picking up the ball while touching the surface area

- The flag stick is not allowed to be touched or moved

Do you think golf courses should open in South Africa? Let us know on Twitter - @Sport24news 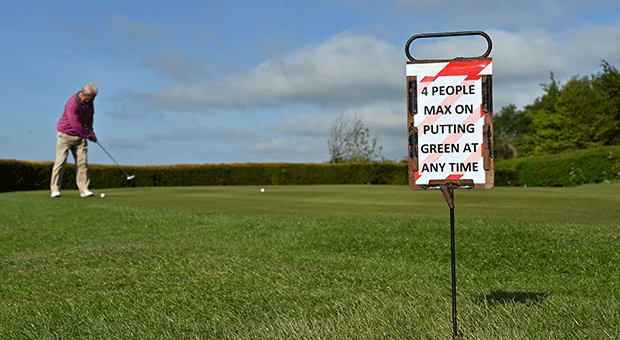 We live in a world where facts and fiction get blurred
In times of uncertainty you need journalism you can trust. For 14 free days, you can have access to a world of in-depth analyses, investigative journalism, top opinions and a range of features. Journalism strengthens democracy. Invest in the future today. Thereafter you will be billed R75 per month. You can cancel anytime and if you cancel within 14 days you won't be billed.
Subscribe to News24
Related Links
'A little boring' - pro golf returns without fans in South Korea
McIlroy to play first 3 events when PGA Tour returns
Up to 25 golfers face 14-day quarantine before PGA Tour return
Next on Sport24
Mexico's Ortiz among latest trio to join LIV Golf