Trump's son back in Dubai for business

Dubai - Three months after the US President's son Donald Trump jnr opened a golf course in Dubai, he was back in the Gulf emirate this week to talk business and to address university graduates.

The Trump International Golf Club inaugurated in February was the first foreign launch of a venue bearing the billionaire president's name since he took office in January.

"It was great having my dear friend and business partner Donald Trump jnr over for lunch," Hussain Sajwani, the head of Damac Properties which built the golf course, wrote on Instagram.

"Discussing new ideas and innovation always make our meetings even more interesting," he added in a post carrying a picture of the two.

President Trump himself is scheduled to be in Saudi Arabia, neighbouring the United Arab Emirates, from Saturday on his first foreign trip since taking office in January.

Apart from meeting his business partner, Trump's son on Wednesday delivered the keynote speech at the graduation ceremony of the American University in Dubai, where he told graduates of his father's fight for the presidency. 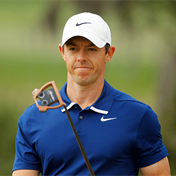