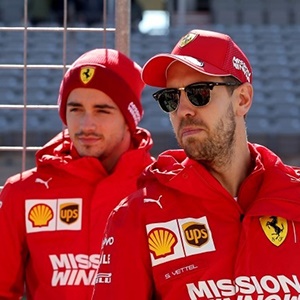 Ferrari team principal Mattia Binotto says the team "love and appreciate" Sebastian Vettel because he is "genuine and straightforward".

The four-time World Champion signed for Ferrari ahead of the 2015 season, coming closest to winning the title in 2017.

He has always enjoyed No.1 status within the team, but in 2019 that changed when Charles Leclerc graduated to Ferrari and outperformed his experienced team-mate, forcing himself onto an equal standing.

Vettel's contract is up at the end of 2020, though he has been offered a one-year extension on a reduced salary. But with the season yet to get underway due to the coronavirus pandemic, Vettel's stock is being lowered while he is unable to prove himself.

But, Binotto says that Vettel is "loved" at Ferrari due to his "genuine and straightforward" nature.

Speaking to Sky Sports, he said: "I don't think the interruption is suiting either driver as they all really love racing as it is part of their lives.

"I know that Sebastian is missing normality and misses that we are not on track racing, he would like to be back as soon as possible but we need to do that when everything is gone and we are back to normality.

"I think his desire is to race at any moment, Seb is a genuine and straightforward person. He loves his job and that is one of the reasons why as Ferrari we love and appreciate him so much."

Leclerc has been keeping busy with Esports racing – he won F1's Virtual Australian Grand Prix on debut for Ferrari, while he also set up the Race for the World series to raise funds for charity.

And Binotto is delighted to see all the Esports work Leclerc has been doing.

"Leclerc enjoyed the Esports race and I think for him it was important to get back in the cockpit, he was missing the cockpit and missing racing," he explained.

"It has been a great event with a lot of enthusiasm and feedback, people were positive which is good. Charles started on pole and won which is good and what he was looking for so he enjoyed the moment.

"I am in contact with both drivers maybe on a daily basis just to make sure that everything is going OK with them.

"They are both trying to occupy themselves, they need to stick to the laws of their countries but they are training, they are trying to keep fit, not only on the physical side but also the mental side, making sure that whenever we return to normality that they are ready to start again."