In a sombre atmosphere following the death of three-time champion Niki Lauda, the championship leader and defending five-time champion clocked a fastest lap of the famous Mediterranean street circuit in one minute and 12.106 seconds to outpace the Dutchman by 0.059 seconds.

Hamilton's Silver Arrows team-mate Valtteri Bottas was third, only 0.072 seconds adrift of the Englishman, ahead of Monegasque Charles Leclerc of Ferrari and his team-mate Sebastian Vettel and Pierre Gasly in the second Red Bull.

The two Ferraris were three-tenths and seven-tenths slower than Hamilton respectively. It was the first time a Mercedes car had led a Monaco session since 2017, boosting their hopes of extending their dominant season-opening streak of an unprecedented five one-two triumphs.

Nico Hulkenberg was seventh for Renault ahead of Kevin Magnussen of Haas, Kimi Raikkonen of Alfa Romeo, who is due to start his 300th race on Sunday, and Romain Grosjean, in the second Haas.

The two Haas cars missed much of the session after being black flagged to return to the pit lane due to communication problems that were resolved, permitting them to rejoin the action.

Carlos Sainz of McLaren was unable to clock a lap time after suffering technical problems with his car.

We live in a world where facts and fiction get blurred
In times of uncertainty you need journalism you can trust. For only R75 per month, you have access to a world of in-depth analyses, investigative journalism, top opinions and a range of features. Journalism strengthens democracy. Invest in the future today.
Subscribe to News24
Related Links
Emotional Hamilton excused Monaco media briefing
Ferrari and Mercedes to carry Lauda tributes on cars
Former race driver Niki Lauda was business visionary
Next on Sport24
Covid-19 case Hamilton 'devastated' to miss Sakhir Grand Prix 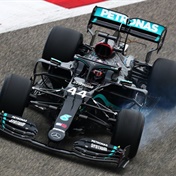