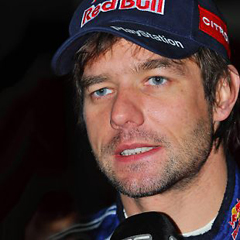 Nine-time World Rally champion Sebastien Loeb says he has no trouble finding ways to lift his spirits and pass the time during coronavirus-enforced lockdown.

Dirt-biking through the kitchen, driving Formula One on a games console, and embarrassing co-driver Daniel Elena on social media, are among the diversions Frenchman Loeb has found under lockdown at his home in Switzerland.

Loeb last competed in the Monte Carlo rally in January, the opening round of the World Rally Championship.

He has never been behind the wheel for his Hyundai team since, with the season now on hold due to the Covid-19 pandemic.

With time on his hands Loeb has adopted new pursuits.

These include riding his dirt bike around his swimming pool, up the garden steps and through his kitchen in the Swiss sunshine.

The video has been seen more than 141 000 times on Instagram, giving a glimpse of how he passes his time away from his chosen sport.

"I don't do too much. A little bit of sport, PlayStation, I look after my daughter, a bit of trampoline and some dirt biking at home," Loeb told AFP this week.

As well as his biking video, fans have been following the banter between Loeb and team-mate Elena on social media.

On Sunday, a well-toned Loeb posted images of him working out with the caption: "My (first) punishment for driving my bike in the house. 250 press-ups everyday."

A less buff Elena fired back a day later with photos of himself matching Loeb's efforts, saying: "The success of a team is its complementarity."

Loeb denied he was in competition with Elena.

"With 'Danos' it's not a challenge that I've started, it's him who starts the challenges himself by doing the same thing as me," he said.

"It's not always a success but you have to make the effort to try!"

As well as interacting on social media Loeb said he had traded his rally car for a Formula 1 motor on a games console.

"It's a bit of a change," he said. "In rallying, it's pure driving, we're not in a peloton, so it's a bit different. On the track, I think there's more to gain from being on PlayStation or whichever simulator. For me it passes the time."

Loeb is contracted to compete in six rallies for Hyundai this season which could re-start in July. But the Frenchman has more questions than answers about the rest of the campaign.

"The next three legs have been postponed. Will they take place?

"Will we be out of the lockdown and will the situation stabilise so activities can restart in three weeks? One month? Two months?" Loeb said.

"I don't know anything, and I don't think anyone does really. We'll see, we'll deal with it," he added.

We live in a world where facts and fiction get blurred
In times of uncertainty you need journalism you can trust. For only R75 per month, you have access to a world of in-depth analyses, investigative journalism, top opinions and a range of features. Journalism strengthens democracy. Invest in the future today.
Subscribe to News24
Related Links
Canadian Grand Prix postponed due to coronavirus pandemic
F1 in 'very fragile state', warns McLaren boss Brown
Leclerc admits he was too impatient in 2019
Next on Sport24
F1: George Russell denies giving Valtteri Bottas a 'slap' after Imola crash