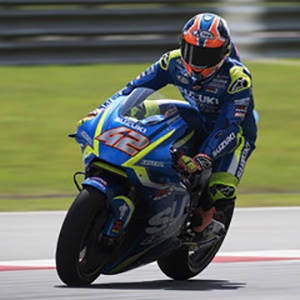 Alex Rins has signed a new deal with Suzuki that will keep him at the team until 2022, the MotoGP outfit announced on Sunday.

"The renewal of the contract between Suzuki Racing Company ... and the 24-year-old Spaniard arrives during a very peculiar moment in history," Suzuki said in a statement.

"But this contract renewal confirms that Suzuki, the team, and the rider are all thinking about the future and focused on achieving even better results."

Two wins and a series of good races landed Rins fourth place in the 2019 campaign, but he is yet to race this year due to the coronavirus pandemic that has stopped the season from starting.

Ahead of him last year were Maverick Vinales, Andrea Dovizioso and reigning world champion Marc Marquez, who in February signed an extension with Honda until 2024.

Alongside Vinales at Yamaha for the 2021 and 2022 seasons will be Fabio Quartararo, who will replace the 41-year-old seven-time world champion Valentino Rossi.