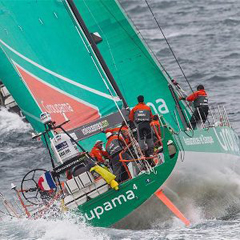 The Groupama boat can still be caught, but a top-three finish in the final stage between Lorient, France, and Galway, Ireland, will confirm Cammas' crew as winners on July 7.

Cammas insists Groupama's first-place finish is not guaranteed despite a 23-point advantage over Ken Read's Puma.

Camper is another five points adrift.

"It's not finished, we still have one leg to do and it is important to do this leg very well," Cammas said.

"It's very good feeling for sure, it's a dream we had 10 months ago, and we realised this dream now by winning in Lorient," added Cammas, who is skippering France's first entry in the race since 1993-94.

Spain's hopes for a first ever win of sailing's premier offshore race had been crushed overnight. After Iker Martinez's Telefonica suffered a third badly damaged rudder - port, starboard and the emergency backup all went in the space of 10 hours.

Telefonica had led the race from November to May, winning the first three legs. They were only eight points behind the French at the start of the eighth stage.

Lionel Pean was the first to win the race for France in 1985 on L'Esprit d'Equipe.