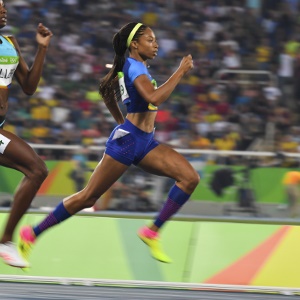 Los Angeles - US track queen Allyson Felix said Monday she has set her sights on the 2020 Olympics after winning a record sixth gold medal at last year's Rio Games.

The 31-year-old 400m and 200m star revealed she plans to compete in at least one more Olympics after being honoured as female athlete of the year at the Los Angeles Sports Awards.

Felix became the only female track and field athlete in history to win six Olympic gold medals last year when she added the 4x100m and 4x400m titles to the four golds she accumulated at the 2008 and 2012 Games.

The Los Angeles native stands tied with Jamaican great Merlene Ottey as the most decorated female Olympian in track and field history with a total of nine Olympic medals.

Felix said Monday she planned to scale back her commitments in order to compete in Tokyo - in what would be her fifth Olympics.

"Yes, I think I want to do it," Felix said when asked if she planned to race in Japan. "I am still excited about the sport.

"The biggest thing I have learned (in 2016) is that now I have all this experience, I know that I can train smarter and need to compete less."

Felix started 2016 targeting an Olympic 400m-200m double but saw her season derailed by a freak gym accident when she stepped on a medicine ball and injured her ankle.

She struggled to regain full fitness in time for the US Olympic trials, where she booked her ticket to Rio with a battling win in the 400m, but failed to qualify in the 200m.

In Rio she came within a whisker of winning gold in the 400m, taking silver after being beaten by just 0.07 after Shaunae Miller of the Bahamas dived for the finish line.

Felix said after her injury-disrupted 2016 she had regained fitness as she looks ahead to this year's World Championships in London.

"I'm feeling like myself again and it feels good," Felix said, adding that she will focus on the 200m, what she described as "my favourite event."

"I don't think I will ever be done with it until the end," she said.

We live in a world where facts and fiction get blurred
In times of uncertainty you need journalism you can trust. For only R75 per month, you have access to a world of in-depth analyses, investigative journalism, top opinions and a range of features. Journalism strengthens democracy. Invest in the future today.
Subscribe to News24
Related Links
Djokovic eyes fun in Acapulco after Oz nightmare
Federer off to smooth Dubai start
Klaasen, Ram triumph in Delray Beach
Next on Sport24
Wayde Van Niekerk splits with long-time coach Tannie Ans, switches to US base