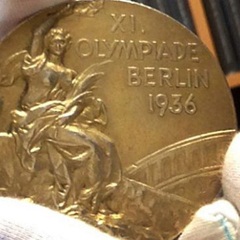 Monaco - American sprint legend Jesse Owens was among 12 athletics stars whose feats at lesser known stadiums were honoured as part of a new initiative launched by track and field's governing body on Sunday.

An IAAF World Athletics Heritage Plaque will be erected in Owens' honour at Ferry Field in Ann Arbor, Michigan - now home to the University of Michigan Wolverines.

Owens famously set four world records in 45 minutes at Ferry Field on one afternoon in 1935, a year before he starred at the Berlin Olympics when he won four golds in front of Adolf Hitler.

In all, the IAAF unveiled 11 other locations covering all six IAAF continental areas, directly associated with the inaugural recipients of the plaques.

"An uniquely designed plaque will be permanently and publicly displayed at a location closely associated with each recipient."

Owens aside, other recipients include four women.

American Mildred Didriksen, who won two golds and a silver in the 80m hurdles, javelin and high jump at the 1932 Games, is honoured along with Fanny Blankers-Koen, the famed "Flying Housewife" from the Netherlands who won four gold medals at the 1936 and 1948 Games.

Male athletes are represented by Britain's Emil Voigt, who won gold in the 5 mile race in the 1908 Olympics, Swedish javelin thrower Eric Lemming, a four-time gold medallist from 1906-12, Finnish middle-distance legend Paavo Nurmi, who amassed a remarkable nine gold and three silver medals in three Olympics from 1920-28, and Czech long-distance runner Emil Zatopek, who won four golds and one silver between 1948-56.

Asia is represented by Japan's 1932 triple jump gold medallist Chuhei Nambu, the first athlete to hold world records in both horizontal jumps, while South America also have a triple jumper honoured in the shape of Adhemar Da Silva, double gold medallist in 1952 and 1956. Africa features through Ethiopian Abebe Bikila, who won marathon golds in 1960 and 1964.

"The launch of this award is an exciting day for our sport as we begin to link together the competitions, personalities and performances worldwide which have played an important role in athletics rich history," Coe said.

"It is important for our sports future that we recognise that legacy."

Coe added: "There would be no point in us placing plaques on the wall of every Olympic stadium as, while they have been the scene of countless epic competitions at the pinnacle of our sports history, these are already well known landmarks.

"Instead we are looking to highlight lesser known locations associated with equally outstanding performances.

"Many of the stadiums and tracks which we recognise today have already vanished and these plaques will be a permanent reminder of the incredible athletics deeds which took place at those locations."

We live in a world where facts and fiction get blurred
In times of uncertainty you need journalism you can trust. For only R75 per month, you have access to a world of in-depth analyses, investigative journalism, top opinions and a range of features. Journalism strengthens democracy. Invest in the future today.
Subscribe to News24
Related Links
Coe in spotlight as IAAF mulls Russian reintegration
Disappointments and surprises at Ultra-trail Cape Town
Athletes to watch in the Ultra-trail Cape Town
Next on Sport24
Coe in spotlight as IAAF mulls Russian reintegration