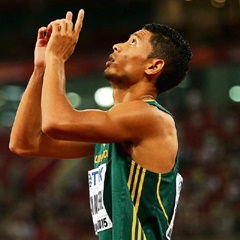 The world 400m champion had previously broken the marks on the two longer distances before running 9.98sec over 100m in Bloemfontein on Saturday.

Van Niekerk was helped by a legal 1.5m/s tailwind and the 1300m altitude at the track.

He will, however, be running only the 400m at the Rio Olympics later this year.

"Wow!!! Truly grateful and humbled by the opportunity and talents the Lord has blessed me with. Finally reaching my childhood dream of sub 10," wrote Van Niekerk alongside a video on his Instagram account.

"Truly so blessed thank you to everyone supporting me with in my career. And all that's contributed to where I am today!!!"

We live in a world where facts and fiction get blurred
In times of uncertainty you need journalism you can trust. For only R75 per month, you have access to a world of in-depth analyses, investigative journalism, top opinions and a range of features. Journalism strengthens democracy. Invest in the future today.
Subscribe to News24
Related Links
IAAF study whistleblower's request to compete again
Olympic fears for Russia as IAAF extend ban
Kenya among 5 countries in 'critical care' - IAAF
Next on Sport24
Mo Farah fails to qualify for Olympics in last-gasp bid