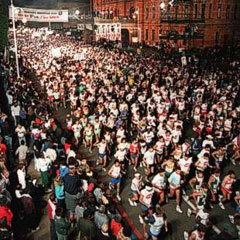 Johannesburg - A 39-year-old runner who collapsed in the final stretch of the Comrades Marathon has died in hospital, The Star reported on Tuesday.

Louis du Preez, a father-of-two from Moreleta Park in Pretoria, spent a week in ICU at St Augustine's Hospital in Durban until his death around 02:00 on Sunday.

Chairman of the Magnoalia Road Runners, of which Du Preez was a member, Tinus Marais said it was suspected Du Preez had an undetected viral infection that led to organ failure.

"Everyone thought he would get better," he said.

Du Preez completed the race in under 11 hours. He ran the marathon as part of the 'Sudan for Jesus' charity initiative. He was one of the top five fundraisers for the group.

We live in a world where facts and fiction get blurred
In times of uncertainty you need journalism you can trust. For only R75 per month, you have access to a world of in-depth analyses, investigative journalism, top opinions and a range of features. Journalism strengthens democracy. Invest in the future today.
Subscribe to News24
Related Links
We let athletes down: ASA
War is over at ASA: Skhosana
Skhosana new ASA president
Next on Sport24
SA athletics events set for November return