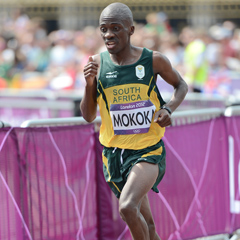 Cape Town - Stephen Mokoka will compete in the first World Marathon Majors race of his career next month in Tokyo, with the South African athlete being revealed in the elite men's line-up on Friday for the annual contest to be held on February 26.

The field, spearheaded by former world record holder Wilson Kipsang of Kenya, includes 10 men who have run faster than Mokoka's 42km career best of 2:07:40, which he clocked at the Shanghai Marathon in 2015.

This will be his maiden appearance, however, in one of the six races that form part of the prestigious World Marathon Majors campaign.

Though he is up against a quality line-up, should he cause an upset, Mokoka will become only the second athlete to win the Tokyo Marathon after national record holder Gert Thys in 1999, and the first to do so since the event was relaunched to form part of the Majors series.

The women's field will be led by former Commonwealth Games 10 000m champion Lucy Kabuu of Kenya, the only lady in the line-up to have dipped under 2:20:00.

We live in a world where facts and fiction get blurred
In times of uncertainty you need journalism you can trust. For only R75 per month, you have access to a world of in-depth analyses, investigative journalism, top opinions and a range of features. Journalism strengthens democracy. Invest in the future today.
Subscribe to News24
Related Links
Fall sees Bekele pull out of Dubai marathon
Ex-Comrades winner undergoes op after shark attack
Kipchoge aims for sub 2-hour marathon
Next on Sport24
SA athletics events set for November return

Choose your newsletters
Voting Booth
Having lost the first Test against the British & Irish Lions, can the Springboks recover to win the series?
Please select an option Oops! Something went wrong, please try again later.
Yes, they will win the series 2-1. Go Bokke!
58% - 4195 votes
The Boks will win a Test, but will lose the series 2-1.
26% - 1865 votes
It's not looking good. A 3-0 whitewash is on the cards.
16% - 1170 votes
Previous Results
Tokyo Olympics
SA veteran star Wenda Nel leaves Tokyo with a smile: 'I gave it my all'