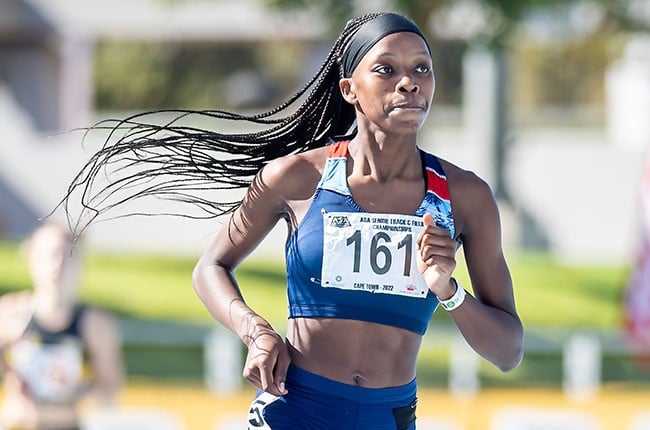 Prudence Sekgodiso outclassed the rest of the line-up to secure the women's 1 500m, while Olympian Kyle Blignaut took gold in shot put on day two of ASA Senior Track and Field National Championships at Green Point Athletics Stadium in Cape Town on Friday.

In cold and windy conditions, Nkosinathi Sibiya won a tight sprint for the win in the men's 1 500m in 3:39.62, holding off challenges from Christopher Swart (3:40.53) and Ryan Mphahlele (3:40.68), who grabbed the silver and bronze medals, respectively.

In the field, Olympic shot put finalist Kyle Blignaut cleared 20 metres to wrap up another national title with a 20.09m heave.

Blignaut, who finished the sixth at the Tokyo Olympics, put more than 30 centimetres further than his nearest opponent, Burger Lambrechts (19.78m).

The 22-year-old admitted he was not yet in his best form but remained confident of challenging for international titles later this year at the African Championships and the Commonwealth Games.

"I'm happy to go over 20m again, but I feel like my season just doesn't want to get going," Blignaut said.

"I just wanted to come here and defend my national title and now I'll go back to the drawing board with my coach (Pierre Blignaut).

"This was my third or fourth competition of the year, but I don't feel as explosive as I did last year, so I think I need to get back into the gym and work towards my other goals this season."

On the track, Marione Fourie earned a convincing victory in the women's 100m hurdles final, though she was unable to target her second sub-13 performance of the season.

Fourie crossed the finish line in 13.43 seconds, with Charlize Eilerd grabbing the silver medal in 14.00 and Marzaan Loots taking bronze in 14.17.

"The wind was a little hard and I felt cold, but it was a great race. My technique was ok, but I had the wind in my face," Fourie said.

Meanwhile, Clarence Munyai was quickest in the men's 200m semi-finals, clocking 20.03 with a +2.3m/s tailwind ahead of Sunday's final.

"All praise to the new champions under South Easterly wind that joined the competition during the course of the day. Brilliant performances all round and young athletes definitely raised their hands to challenge senior elite in their comfort zone," said James Moloi, the President of Athletics South Africa.

"The third and last day of competition is a final galore, making it a must-see for athletics enthusiasts on Saturday (tomorrow)."

We live in a world where facts and fiction get blurred
In times of uncertainty you need journalism you can trust. For 14 free days, you can have access to a world of in-depth analyses, investigative journalism, top opinions and a range of features. Journalism strengthens democracy. Invest in the future today. Thereafter you will be billed R75 per month. You can cancel anytime and if you cancel within 14 days you won't be billed.
Subscribe to News24
Next on Sport24
Where to now for Caster Semenya in 5 000m bid: 'It isn't out of reach'