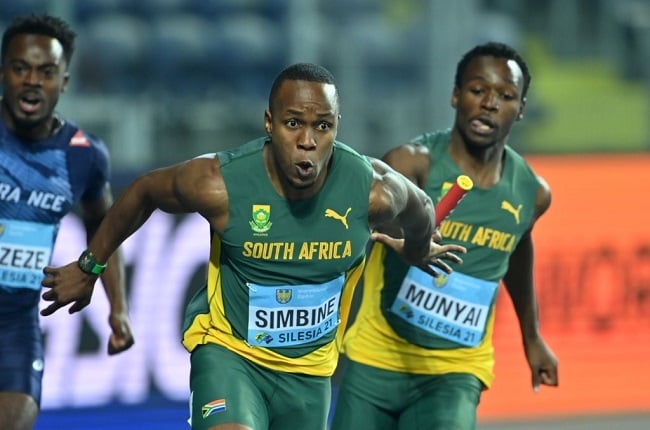 Akani Simbine reinforced his pedigree as one of the quickest and most dangerous sprinters on the planet as he spearheaded South Africa's charge towards the gold medal in the 4x100m final at the World Relay Championships in Silesia, Poland on Sunday evening, snatching a victory from Brazil.

The 27-year-old star, one of the country's Olympic hopefuls at the showpiece in Tokyo this year, was entrusted with running the final leg and recovered from a less than ideal handover from Clarence Munyai to produce a galloping performance that saw him beat his Brazilian counterpart by one-hundredth of a second to stop the clock at 38.71 seconds.

Starting in lane four, South Africa made an unspectacular but solid start through Thando Dlodlo, but gradually gained momentum as Gift Leotlela and Munyai kept their composure and exploited a field that fizzled out badly.

In fact, the last 80 metres were a full-on battle between just Simbine and Paulo Andre Camilo de Oliveira, a thrilling chase that ended in glory by the smallest of margins.

To compound Brazil's disappointment, they were then disqualified for running out of their lane.

The quartet undoubtedly set their ambitions high after making sure of their qualification for the Olympics even before travelling to Poland.

South Africa's 4x400m relay team of Lythe Pillay, Zakhiti Nene, Ranti Dikgale and Oscar Mavundla looked prime to celebrate their Olympic qualification in Saturday's heat by claiming a medal before an error in judgement cost them on the final stretch.

Nene's storming run saw the quartet start their third leg in the lead, which was capitalised on.

However, Mavundla timed final assault far too early as he ran out of steam after a brilliant start, allowing the Netherlands to claim a worthy first place.

Neighbours Botswana trumped them by winning the bronze medal in a time of 3:04.77.

If you missed South Africa's 4x100 team win at the #WorldRelays, here it is.

We live in a world where facts and fiction get blurred
In times of uncertainty you need journalism you can trust. For only R75 per month, you have access to a world of in-depth analyses, investigative journalism, top opinions and a range of features. Journalism strengthens democracy. Invest in the future today.
Subscribe to News24
Next on Sport24
Wayde van Niekerk carrying the weight of SA's golden expectations: 'This is my reality'