Jimmy Tau is back with his weekly tips! 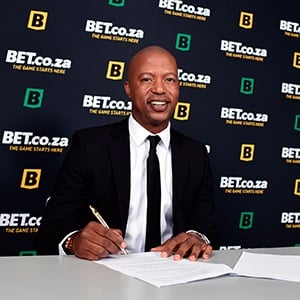 Cape Town - Chiefs fans weren't the only ones throwing their toys on Saturday as Jimmy Tau's first #TausTips got scuppered by their inept performance in Durban.

The BET Boost Army had climbed on his 11/1 shot for Chiefs, United and Chelsea all to win and were left deflated by the near miss.

You can't keep a good man down, though, and Jimmy is back again with two cracking tips for the week.

Firstly, in Europe, he has tipped both Madrid teams to win away from home in their first legs. He's backing Real Madrid to get a result against Bayern in Munich and Atletico to come away with the win in London against Arsenal in the Europa League.

Shifting attention to the PSL, Jimmy has opted for SuperSport United to beat Free State Stars at home and Pirates to beat Wits. For the third leg of his treble he's gone with a draw in the game between Maritzburg United and Sundowns. You'll get a cracking 16/1 on this punt!

"I'm predicting a victory for SuperSport because they are desperate to avoid relegation. They need the win at all costs."

"I foresee a Pirates victory. Pirates need to keep track of Sundowns so they can't afford to see the gap widen between them and the log leaders."

"This one could be a draw. The pressure is growing on Sundowns and it showed in the Nedbank Cup over the weekend when they lost to Maritzburg. Both teams have been good in the league of late and could cancel each other out."