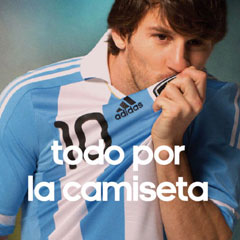 Lionel Messi
Cape Town - adidas and the AFA (Argentine Football Association) have announced the extension of their sponsorship agreement, extending their current relationship until December 2022. The extension agreement comes as a result of the close relationship between both parties that started over 37 years ago. At the 1974 FIFA World Cup™ in Germany, Argentina already wore adidas jerseys.

“We are very proud and excited to announce the extension of our successful partnership with the Argentine Football Association. adidas is the global leader in football and Argentina is without any doubt one of the strongest teams in the world,” said Herbert Hainer, CEO of the adidas Group. “Therefore, we are very much looking forward to continuing our successful partnership and to supporting AFA in their preparations for the 2014 FIFA World Cup™ in Brazil and beyond.”

“We appreciate the continuity and the confidence of adidas. It contributes to building an unbreakable bond with AFA. This agreement fully satisfies AFA and brings important values to continue to develop football in Argentina,” said Julio Grondona, President of AFA, and added: “AFA is committed and will continue wearing the shirt with pride all around the world.”

In addition to this, both adidas and AFA will continue working together to promote football at all levels of the game and in all age groups, both in Argentina and globally.

We live in a world where facts and fiction get blurred
In times of uncertainty you need journalism you can trust. For only R75 per month, you have access to a world of in-depth analyses, investigative journalism, top opinions and a range of features. Journalism strengthens democracy. Invest in the future today.
Subscribe to News24
Related Links
Aiken signs Dunlop deal
SA's immature sponsors market
FIFA sign up new sponsor
Next on Sport24
IMG CEO Forstmann dies