Boros back for another bite at the Drak Challenge 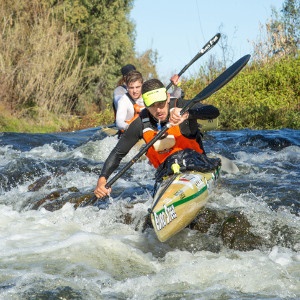 Underberg - Hungarian canoeing ace Adrián Boros has added his name to the entry for the Drak Challenge on January 20 and 21, 2018, as he sets his sights on the full programme of major canoeing races in South Africa this summer.

Boros, who was the K2 world champion with his team mate László Solti in Gyor in 2015 and raced onto the K1 and K2 podium at the world champs in Pietermaritzburg in September, said he was planning to return to South Africa in mid-January, just in time to do his second Drak Challenge.

In 2016 he raced to a modest 23rd place in his debut in the two-day race famous for its plethora of steep rocky rapids. He says that he knows what he is in for this year.

"I recall some of the rapids on the Drak, so it won't be new to me this time," says Boros. "The second day was good, if I remember correctly."

"I am planning to do the Dusi With Carl Folscher, and I want to do all the pre races," said Boros from his native Hungary. "So that includes the Drak, the Non-Stop Dusi and the Umkomaas marathons."

Boros became the first foreigner to won a major South African canoeing title when he won the tough low-water Berg Marathon in July.

He has chosen to spend the European winter, where the cold and snow keeps paddlers away from the training, in South Africa to get into top shape for 2018.

"I want to be fit this year!" he said, adding that he was looking forward to rekindling his relationship with local Carl Folscher.

"We paddled together a few times last year, and you know that feeling when the boat is just going fast, everything is just comfortable. That is the most important thing for a K2.

"Carl is also a good friend of mine, which makes it even better," he added.

Boros will square up to the two local stars that kept him off the top two steps of the world champs podium in Pietermaritzburg in world champion Hank McGregor and defending Drak Champion Andy Birkett.

The Drak Challenge starts at Castleburn on Saturday, January 20 with a 24 kilometre stage to Sinister Pool, just above the Swartberg Road Bridge.

Related Links
Team racing makes its debut at the Drak Challenge
Mbanjwa, Theron up for Dusi challenge
Sweeping changes made for Berg Canoe Marathon
Share
Next on Sport24
Solomon and Boros sieze Berg by the jugular