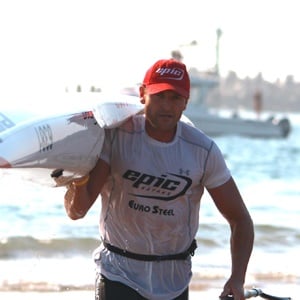 Durban - An air of intrigue hangs over the 2017 Gara Dolphin Coast Challenge on Saturday and Sunday as the major cold front threatens to whip up huge surf and offshore swells for the two day surfski event that is doubling as the SA Double Surfski Championships.

The race organisers are playing a waiting game and will confirm the race course once they assess the surf conditions after the cold front has passed over the region, committed to making sure the prestigious event takes place but also putting the safety of the paddlers and their skis as a priority.

With this year's race having the added incentive of being a national title race and the race is expecting to see some of the finest surfski paddlers lining up on the start line.

For the race's defending champions, Hank McGregor and Lee Furby the conditions will not be foreign, however the crews that will be chasing them are going to make sure that they work for any advantage that they get.

It is expected that the big pressure will come from the experienced duo of Matt Bouman and Wade Krieger.

The pair are good friends and have developed a solid combination over the years, making them a tough nut to crack.

Among other potential podium finishers are the likes of stalwarts Steve Woods and Luke Nisbet, Jason Ekstrand and Richard Lowe as well as Gene Prato and the young Bailey de Fondaumiere.

An outside shot at a top place finish might be the young duo of Clinton Cook and Tyron Maher.

Cook has been in strong form with a positive showing at the recent SA Marathon Championships and Maher is always a strong competitor.

Despite the fact that there is only one all ladies crew entered into the race it would have been difficult to bet against the defending champion pair of Nikki Russell and Jenna Ward.

The pair won the ladies K2 title at the national marathon championships recently and are in fine form and with their fine surfski pedigree are going to provide a challenge for many of all-male pairs on the water this weekend.

In the mixed category there are two boats that will square off for the shot at the national title. The young crew of Brandon van der Walt and Kyeta Purchase will take on the experienced crew of Shaun Burgin and Donna Winter.

With the amount of training and racing the Van der Walt/Purchase duo have been doing recently, they will go into the encounter as the favourites for the mixed title.

Registration from 16:00-18:00 at Suncoast Pirates Surf Lifesaving Club on Friday before the race.