Bennett takes early lead at Tour Down Under

Adelaide - Sam Bennett won a tight sprint finish to take the Tour Down Under's first stage on Tuesday in a quick early return for his new Deceuninck-QuickStep team.

The Irish national champion swept home in the final moments of the 150km stage to cross half a bike ahead of Belgium's Jasper Philipsen.

Bennett's team-mates Iljo Keisse and Michael Morkov took to the front of the peloton to guide the Irishman to the head of the pack and clinch his victory.

"I'd be lying if I'd said I didn't feel the pressure to get that first win," said Bennett, the first Irishman to lead the Tour Down Under general classification.

"I am very happy it came today, on the very first stage of the season's first race, and I can't thank my incredible teammates enough, because the result is down to their amazing effort."

Philipsen, riding for UAE Team Emirates, was the only rider to challenge Bennett and almost pulled off the win at the line in Tanunda, northeast of Adelaide.

Slovakia's Erik Baska was third for Bora-Hansgrohe at the UCI World Tour season-opener.

South African Daryl Impey, chasing a third straight victory in Australia, was seven seconds behind Bennett in the general classification.

"It's a course we know and it's a crucial day for Daryl's ambitions overall."

Stages two and three will take teams and spectators through areas where properties were destroyed in the blazes, which also killed one person and injured others.

"We've been working feverishly to make sure that the route is safe and lots of tree clearance and some minor road repairs have been done," Adelaide Hills Mayor Jan-Claire Wisdom said prior to the race.

Results after the 150km first stage of the UCI Tour Down Under from Tanunda to Tanunda in South Australia on Tuesday:

King of the Mountain 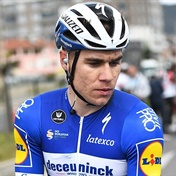