Two French cycling teams shut up in a hotel in the United Arab Emirates for 10 days after a coronavirus outbreak said on Sunday that they were being freed from local quarantine.

Cofidis and Groupama-FDJ had been in lockdown in the country after COVID-19 cases led to the abandonment of the UAE Tour on February 27.

Cedric Vasseur, the Cofidis general manager thanked "all those who worked day and night to bring forward our return."

The UAE Tour was abandoned after two Italian staff members with one of the teams tested positive for the disease. On March 3, the UAE announced six more related cases, saying that two Russians, two Italians, one German and a Colombian had been infected.

Most teams were allowed to leave but the two French outfits, Russian team Gazprom and UAE Team were quarantined in a hotel where other people who had tested positive for the virus were staying.

Earlier the authorities had told team officials the quarantine would continue until March 14.

On 3 March, Cofidis sports director Roberto Damiani had threatened to go on hunger strike if the quarantine wasn't ended soon. 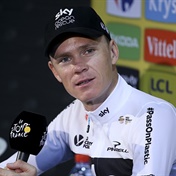