The group would've represented the John Smit Foundation and had planned on using the event to raise funds for the event’s various charities.

However, after the race’s Covid-19-enforced cancellation and the subsequent national lockdown, Smit and his team-mates went in search of a way to support a community who have been particularly hard hit by the crisis.

Ceres was set to host the first two nights of the 2020 Cape Epic and as such it was chosen as the community to benefit from Barney’s Army’s efforts; support in the form of money used to purchase food parcels for families in need.

After discussions with a nutritionist, a well-balanced and specific mix of products was chosen to make up the food packs to be donated, and which come in at a cost of around R60 per pack.

The fundraising drive took the form of a group ride on Zwift on Sunday, 26 April. In total, over 1 000 riders joined the group ride and many more participated offline by riding laps around their gardens. The target was for all participants to complete 66km, which would've been the distance of the final stage of the 2020 race; from Wellington to Val de Vie Estate.

R50 000 was the target set out; a number that seemed quite daunting given the short lead time. But at the time of publishing, R249 460 had been raised; a quick calculation equated the amount raised to over 4 000 food parcels.

“It was initially awfully hard to predict how much money we would raise, but we thought that with the direct efforts of our Barney’s Army team we could, at a push, probably raise R50 000, and that any that came in from the public would be a ‘bonus’. So it was extremely gratifying and quite overwhelming that we hit our initial target the day before we even did the event, and that on the day of the ride, we ended up reaching almost R250 000 - almost 5x our original goal - quite simply, the generosity of so many people, in such difficult times, is almost beyond comprehension.

And in addition to everyone that donated money, and the 1 000 plus people that rode with us, enormous thanks and gratitude must go to all our guest ‘stars’ who gave up their time to lend their support and reach to our challenge - to have so many world-class sportsmen, and other 'high profile' people from different walks of like contributing to the efforts, and the livestream made an enormous difference.

The Barney’s Army Epic Ride for Food was an incredible example of the power of collaboration and shared purpose, and we at Barney’s Army will forever be grateful for everyone’s contribution.

These are incredibly difficult times for everyone in South Africa and around the world, and it’s certainly easy to become disillusioned and anxious, and that’s completely normal, but my goodness, South Africans have a resilience and ability to overcome challenges that seem to defy all ‘logic’. The way that people come together in times of great challenge and crisis is a testament to the power of the human spirit in our amazing country, and as dark and difficult times might seem now, the sun will continue to rise every morning, and despite, and perhaps even because of, the challenges that still lie ahead, we will emerge stronger than ever together,” reflected an emotional Ron Rutland post his Zwift efforts.

An equally emotional and excited John Smit, a.k.a Barney, added, “Sunday’s ride for food was something that far exceeded our expectations, the goodwill of people not only to participate but also in donating in these challenging times was food for the soul in a time when it was most needed. I finished that ride so pumped up because of people’s generosity that I could have easily done another loop!!! Thank you to everyone involved, I am truly humbled and grateful Barney's Army can help in some small way.”

Gareth Harrington, Sponsorship Account Manager at the Cape Epic added, "The months since the cancellation of the 2020 Cape Epic have been a whirlwind of emotion for all stakeholders involved. It is in challenging times like these that true heroes show their colours and what John, Ron, and the Barney's Army team have done to raise funds to support the community in Ceres is truly fantastic. A special thanks needs to go out to Zwift for bringing over 1 000 riders together in the virtual world for a great cause."

Riders who were unable to join are still more than welcome to donate to the cause.

Donations to the Barney’s Army food package initiate in Ceres can be made via Zapper or GivenGain.

Alternatively, visit www.barneysarmy.co.za to find out more about the John Smit Foundation and its charitable works. 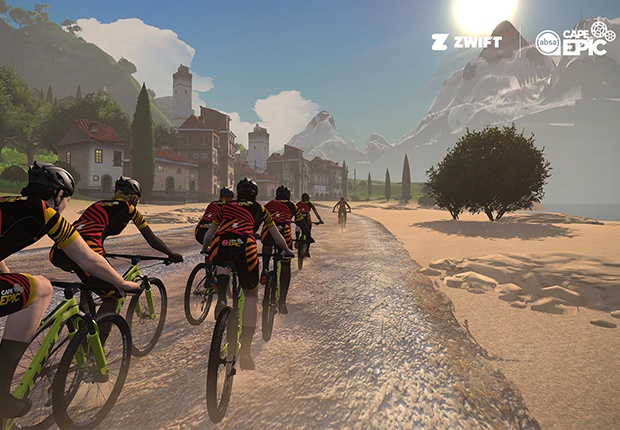