Dubai - Slovenia's Primoz Roglic won the Tour of the UAE on Saturday after leading since the opening day of the competition.

"It was windy at the start but we (the team) finished in the same way we started. It's promising for the season," 29-year-old Roglic said. 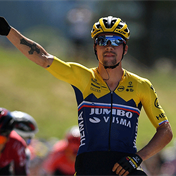