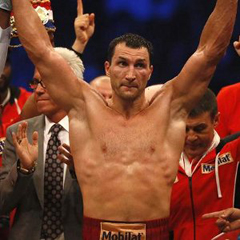 The 38-year-old produced an impressive display in the 17th defence of his world titles on Saturday with a fifth round knock-out of IBF mandatory challenger Kubrat Pulev in Hamburg for his 63rd victory and his last defeat is now a decade ago.

Of the world's top four -- the IBF, WBA, WBO and WBC belts -- only the WBC crown, currently held by Canada's Bermane Stiverne, is missing from Klitschko's collection.

Stiverne is due to defend his WBC belt for the first time against Deontay Wilder of the United States in Las Vegas on January 17 and Klitschko is likely to face the winner.

Boxing legends Lennox Lewis, Riddick Bowe, Evander Holyfield, Buster Douglas and Mike Tyson have all held a maximum of three of the titles simultaneously, just like Klitschko does now.

Elder brother Vitali, who last fought in 2012, twice held the WBC title before retiring as champion to go into politics and is now the mayor of Kiev, and Klitschko wants to bring the belt back into the family.

"My big wish is to bring the WBC belt back into the family," Hamburg-based Klitschko told German magazine Sport Bild.

Previously, Klitschko would have had to relinquish all of his belts to fight for the WBC title, but that has changed and a unifying bout could now happen.

"Wladimir is a true icon of boxing and the WBC would completely support a unification fight," said WBC president Mauricio Sulaiman.

"Wladimir couldn't have been a WBC champion for a long time, because his brother held the title and they didn't want to fight each other.

"The fact that Vitali clearly won't fight again means the way is clear for Wladimir."

We live in a world where facts and fiction get blurred
In times of uncertainty you need journalism you can trust. For only R75 per month, you have access to a world of in-depth analyses, investigative journalism, top opinions and a range of features. Journalism strengthens democracy. Invest in the future today.
Subscribe to News24
Related Links
Wladimir unbeatable: Vitali
Klitschko knocks out Pulev
Klitschko ignores Briggs' taunt
Next on Sport24
Alvarez takes on Yildirim with super middleweight domination in mind