Washington - Marcos Maidana is so confident he will beat undefeated world champion Floyd Mayweather that he said on Monday he would risk his prize money for their September 13 welterweight rematch.

Argentina's Maidana lost a majority decision to Mayweather in their title unification bout in May but last week Mayweather announced that he would face the South American slugger again in Las Vegas.

The fighters launched a five-city promotional tour on Monday in New York with Maidana speaking to reporters at a second event in Washington.

Mayweather, 46-0 with 26 knockouts, won the World Boxing Association and World Boxing Council crowns after saying he would not fight until Maidana switched gloves, claiming his rival's choice did not have enough padding.

Maidana, 35-4 with 31 knockouts, agreed to switch gloves but brought up the issue when Mayweather dared him to bet his share of their rematch purse on a victory, asking, "We can bet whatever, but will he let me use my gloves?"

Maidana says he is ready to win in whatever gloves Mayweather chooses.

"I feel like this is my time now and I will win this rematch," he said. "I'm willing to take the bet, no problem."

But just which gloves will be used remains unclear.

"It hasn't really been finalized yet," Maidana said. "The last time I couldn't use my gloves. I suspect that will be the situation again.

"I don't think he's afraid. I think he's just trying to be cautious. He knows he has to respect my power.

Mayweather also taunted Maidana as being a dirty fighter, noting a gash on his right eyelid.

"My eye didn't get a deep gash from a punch. I got it from a head butt," Mayweather said. "I'm not fighting a boxer. I'm fighting a (mixed martial arts) fighter."

Maidana shrugged off the complaint and spoke of being elbowed often by Mayweather.

"Floyd is a fighter who always comes up with excuses," Maidana said. "He calls me a dirty fighter and he always uses his elbows. If you want to fight dirty, I'm with you.

"He can do whatever he wants. He's not getting into my head. If he would like to stand and fight I'll beat him. If he runs I'll chase him down and then beat him."

Maidana said he plans no major changes for the rematch.

"I just have to fine tune a few things," Maidana said. "I have to get my punches off a little better."

Maidana was disappointed at Argentina's loss to Germany in Sunday's World Cup final but said he does not feel extra pressure to bring sporting glory to his homeland because of it.

"It was painful to see them lose but at the same time I was very happy for them - they made the final and gave a great effort," Maidana said.

"Of course you feel a little bit of pressure for your country, but I want to win it for myself."

We live in a world where facts and fiction get blurred
In times of uncertainty you need journalism you can trust. For only R75 per month, you have access to a world of in-depth analyses, investigative journalism, top opinions and a range of features. Journalism strengthens democracy. Invest in the future today.
Subscribe to News24
Related Links
Mayweather tops Forbes list
Oscar inducted into Hall of Fame
Next on Sport24
Tyson wants more over-50 fights and he's tough, says Jones 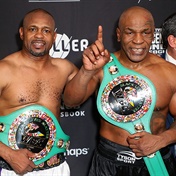