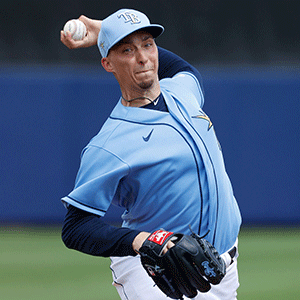 Tampa Bay Rays star pitcher Blake Snell says risking his life by playing Major League Baseball (MLB) during the coronavirus pandemic for reduced pay is "just not worth it."

The 27-year-old left-hander said on Wednesday on his Twitch social media channel that he was concerned about the potential long-term health damage if he contracted the deadly virus that prevented MLB from opening in March as planned.

"The risk is way the hell higher and the amount of money I'm making is way lower. Why the hell would I think about doing that?" Snell said.

MLB has pitched a reopening plan to the MLB Players Association, but wants players to take a further pay cut from the pro-rated rates agreed upon in April for a season expected to be shortened to about 82 games per club - if it can be played at all.

That's a step too far for Snell, the 2018 American League Cy Young Award winner as best pitcher with a major league-leading 21 wins.

"For me to take a pay cut, it's not happening, because the risk is through the roof," Snell said.

"It's a shorter season. Less pay. I've got to get my money. I'm not playing unless I get mine. That's just the way it is for me. I'm sorry if you guys think differently."

Snell, who was set to make $7 million for the 2020 campaign, ripped MLB's plan for a 50-50 split of reduced revenues this year, sharing financial losses with players while extra profits went unshared in better times.

"You all got to understand. You're all going to be like, 'Blake play for the love of the game, man. What's wrong with you? Why should that be a thing?'" Snell said on Twitch.

"Bro, I'm risking my life. What do you mean it should not be a thing? It should 100% be a thing. If I'm going to play, I should be getting the money I signed to be getting paid.

"I should not be getting half of what I'm getting paid because the season's cut in half, on top of a 33% cut of the half that's already there - so I'm really getting, like, 25%.

"On top of that, it's getting taxed. So, imagine how much I'm actually making to play, you know what I'm saying?

"All that money is gone and now I play risking my life. And if I get the 'rona (virus), guess what happens with that? That stays. That's in my body forever. That damage that was done to my body, that's going to be there forever. So now I've got to play with that."

In text messages later to the Tampa Bay Times, Snell said his stance is about safety and health rather than money, calling the pay cut owners want "super frustrating" because players "have way more risk."

"I mean, honestly, it's just scary to risk my life to get Covid-19 as well as not knowing and spreading it to others," Snell told the newspaper.

"I just want everyone to be healthy and get back to our normal lives 'cause I know I miss mine."