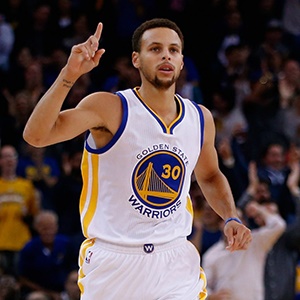 Oakland - The all-conquering Golden State Warriors have become only the fourth team in history to be awarded Sports Illustrated's annual "Sportsperson of the Year" award, the magazine announced on Monday.

The Warriors, who won their third NBA crown in four seasons this year, were honoured with the award in recognition of their collective feats on court over the past five years.

As well as three NBA championships, the Warriors have also set records for wins in a regular season, with 73 in the 2015/16 campaign, as well as the longest unbeaten streak to start a season (24-0).

"But it was impossible to overlook the influence that the Warriors, as a collective group, have had on their sport and the broader culture over the last half-decade.

"They are a generational phenomenon, the likes of which we might not see again for decades, if at all."

Only three other teams have been handed the award, which usually goes to an individual athlete. The Warriors join the 1980 Winter Olympics US hockey team, the 1999 US Women's World Cup soccer squad and the 2004 Boston Red Sox.

"This is a pretty cool honour and something we cherish as a group and organisation," said Warriors guard Stephen Curry.

"I know that I speak on behalf of my team-mates when I say that we're humbled with this recognition. The list of other teams who have earned this award ... puts us in exclusive company. That's exciting."

The first recipient of the award was trailblazing British middle-distance runner Roger Bannister in 1954.

We live in a world where facts and fiction get blurred
In times of uncertainty you need journalism you can trust. For only R75 per month, you have access to a world of in-depth analyses, investigative journalism, top opinions and a range of features. Journalism strengthens democracy. Invest in the future today.
Subscribe to News24
Related Links
LeBron passes Wilt on NBA all-time scoring charts
WATCH: Semenya reveals LeBron James is 'close to her heart'
LeBron teams with 'Black Panther' director for 'Space Jam 2'
Next on Sport24
Hurt and heartbroken McGregor ponders future after knockout shock