Federer: US Open 'unlocked' something in Anderson Monaco - Reaching the final of the US Open last year unlocked something in big-serving South African Kevin Anderson.

It was a run that proved that he belonged at this level and that he could mix it up with the biggest names on tour.

That is the view of world number one Roger Federer, who has won just about everything there is to win.

Federer continued that trend on Tuesday night in Monaco with two more Laureus World Sports Awards to add to the trophy cabinet.

Federer won in the Comeback of the Year and Sportsman of the Year categories to take his total Laureus tally to six.

It is an achievement that is unrivalled, and Federer is set to continue for as long as his body allows him to.

When asked about Anderson's year last year, Federer was full of praise for the current world number eight.

"I think the US Open might have unlocked a lot of things for Kevin in his head and in his game that maybe before he wasn’t sure he could achieve," Federer, whose mother was born in South Africa, said.

"I was very happy for him.

"That was a great win and comeback for him having been not so well, I believe."

Federer added that he has always been impressed by Anderson's approach to the game.

"I think he is a great player," he said.

"He is going to go out swinging and trying his absolute best, and then good things can happen, absolutely." 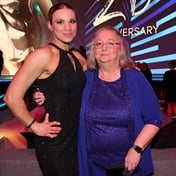