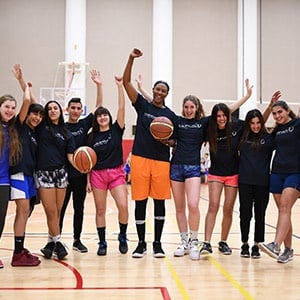 Cape Town - In a country that often makes the headlines for all the wrong reasons comes a story about celebrating a project that is all about using sport for good.

Israel and the West Bank’s deep social divides create an atmosphere of fear, misconception and negative perceptions of the “other”.

With 60% of the population youth and children, it is this next generation that have the most to gain from the development of sustainable peace and the most capacity for change.

Laureus Sport for Good believes in using the unifying power of sport to bring children and teenagers of both cultures (predominantly Israeli Arab, Israeli Jew and Palestinian) together to overcome existing prejudices.

Their middle east project’s aim and involvement in the region is simple: use sports to build peace.

"Children who play with each other can learn to live together," says the Laureus Sport for Good Middle East initiative.

The organised team sports often create the very first point of contact between the kids, who usually would have no contact with each other in everyday life.

Training together, winning and losing together, all promote closeness, builds friendships, and helps to overcome fears and prejudices.

For the first time, these children are playing on the same team together, instead of against – and winning. It seems an idea too simple to work but using basketball to facilitate positive relationships – has in short, bridged the divide and changed the perceptions of both the children, and their families.

The idea for sport for peace all comes from our President Nelson Mandela, the first Patron of Laureus, who at the inaugural Laureus World Sports Awards (an annual award ceremony honouring individuals from the world of sports and sporting achievements) in 2000, said:

The message was heard by the Laureus Academy and the challenge accepted. They have since gone on to support over 100 projects and sport initiatives in 35 countries around the world including the Middle east project and the Waves for change project in South Africa) that raise awareness on the serious social problems young people are faced with today.

We live in a world where facts and fiction get blurred
In times of uncertainty you need journalism you can trust. For only R75 per month, you have access to a world of in-depth analyses, investigative journalism, top opinions and a range of features. Journalism strengthens democracy. Invest in the future today.
Subscribe to News24
Related Links
SA’s pool champ is sticking it to the competition
New netball boss plans to build legacy
Poole out to prove that short men can jump
Next on Sport24
Lucky to be alive, Oksana Masters working to get Paralympic dream back on track