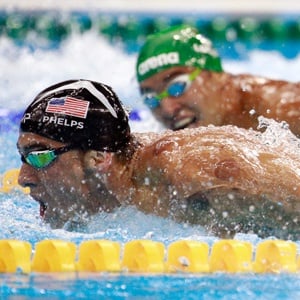 Rio de Janeiro - Swimming at Rio 2016 is a thing of the past, and so too is the career of Michael Phelps.

The American great finished with 5 gold medals and 1 silver at this year's Games, taking his overall Olympic tally to a breathtaking 23 golds and 28 medals in total.

It is a record that we may never see beaten.

He was disappointed with that effort after having stunned Phelps at London 2012 to win the 200m butterfly.

Phelps has been vocal on how losing his 200m crown to Le Clos in 2012 was the reason he decided to come back in Rio.

As a result, the 200m 'fly final in Rio was billed to be one of the highlights of the Games as the Le Clos v Phelps rivalry resumed.

Instead, Le Clos disappeared out of the medals to finish 4th as Phelps obliterated the field to take back his title.

One of the talking points to emerge from that rivalry came before the semi-finals, when television footage showed Le Clos shadow boxing and dancing around in front of Phelps before their race.

Phelps's reaction was priceless, his face squeezing up in disgust as Le Clos bounced around.

Social media blew up in reaction to Le Clos's attempt to get into Phelps's head, and Sport24 spoke to a few Team USA fans at the Olympic Aquatic Centre this weekend before the 100m butterfly final.

That result went a lot better for Le Clos as he finished in a tie for 2nd with Phelps and Laszlo Cseh, but his antics a few days earlier had Americans puzzled.

Why would a one-time Olympic Gold medallist try and get inside the head of the greatest of all time?

Here's what the American Phelps fans had to say ...