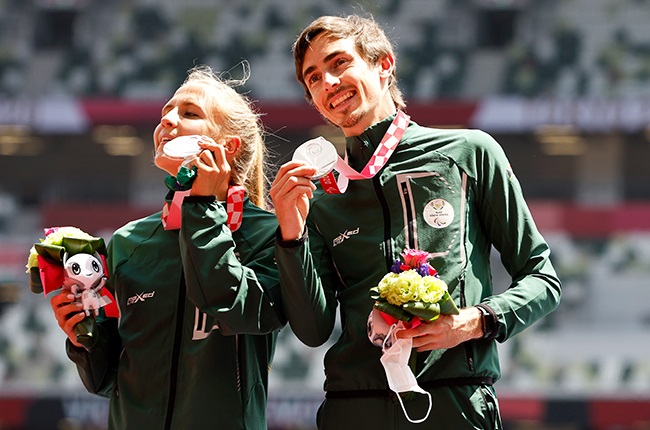 South Africa's Louzanne Coetzee produced a stunning performance to win a Paralympic silver medal in the women's T11 1 500m a race on Monday.

The 28-year-old, who was competing in her sixth major championship event since 2013, finished second in a career best and African record time of 4min 40.96 seconds.

She and her guide, Erasmus Badenhorst, carved nearly nine seconds off their qualifying time to finish second behind Mexico's Monica Rodriguez Saavedra, who broke the world record in taking gold in 4:37.40.

The race was held in 32 degrees heat with a humidity percentage in the 70s and her time was only 2.04 seconds off the previous world record set by China's Jin Zheng at Rio 2016.

In Rio, Coetzee was disqualified after a ruling that her guide had stepped in front of her. However, that memory, along with a fourth-place finish in the 2017 World Championships, were well and truly extinguished on Monday.

"I can't believe it," Coetzee told the Team SA website after winning South Africa's third medal at the 2021 Paralympics.

"I have been competing for eight years and this is my first medal. I'm just overwhelmed. I couldn't have asked for a better race, a better guide, better preparation, I'm just very thankful for how everything went down."

SILVER ?? Team SA's Louzanne Coetzee has won SILVER in the women's T11 1500m final in an African record 4:40.96. It is #TeamSA 's 3rd medal of the #TokyoParalympics pic.twitter.com/zMCVgDscfx

Coetzee still has the T12 marathon left in her schedule, with the race starting at 06:30 Tokyo time on Sunday (23:30 SA time on Saturday).

She will compete again on 5 September in the marathon alongside guide Claus Kempen. #TeamSA pic.twitter.com/TrMX7kPlzd