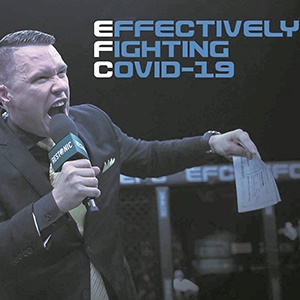 The Extreme Fighting Championship (EFC) has become the latest organisation to submit a plan to government for the possible resumption of matches in coming weeks.

EFC, like rugby, cricket and several other sports, said on Wednesday that they have a “Covid-19 mitigation plan” in place as part of their readiness to recommence mixed martial arts (MMA) bouts.

“An application to the South African government has been made and we are awaiting a formal response.

"We are really hopeful, as based on our safety procedures being stricter than just about any other sport or industry, there is no reason for EFC not to be given the go-ahead to resume,” said EFC president Caro Howarth.

The group said they would leverage their vast TV broadcast platform to continue to reach millions of viewers from across the continent and the globe during the pandemic.

“Government has already permitted TV production companies and studios to return to operation under level 4. EFC is ready and able to arrange MMA bouts, produced exclusively for TV behind closed doors, in a controlled TV studio environment, that will be as safe (or safer) than the average-sized TV production.

“Unlike larger team sports, EFC bouts do not bring together many participants in one competition. Athletes compete individually in bouts, they will have been extensively screened, and will have had to test negative for Covid-19 just prior to the bout, and will be strictly quarantined after testing until competing. Hence the risk of transmission is very low,” the organisation claimed.