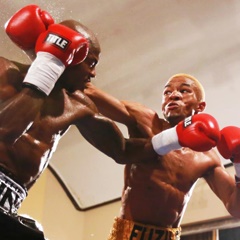 Fuzile, who turned 21 last Sunday, will defend his belt against Maemu at the Orient Theatre in East London.

The Duncan Village-born Fuzile made a name for himself by joining a select group of the country’s greats when he won the national featherweight belt in only his fifth bout as a professional fighter at the age of 20.

He achieved this feat by beating Macbute Sinyabi by a ­unanimous points decision at Orient Theatre in September.

The Kusile Comprehensive High School Grade 12 pupil added the International Boxing Federation intercontinental belt to his possessions by outpointing Sydney Maluleka in a South African title defence at Orient Theatre in May.

Now, Golden Boy wants to prove to Maemu, who is four years his senior, that he is the real deal.

“I could not celebrate my birthday properly last week as I was training hard for this clash.

"My aim is to finish the bout early and later go enjoy myself with some of my classmates and camp members as a belated celebration,” said Fuzile.

He will need to be cautious and not make the mistake of taking Maemu lightly because War Child is an experienced campaigner who has been inside the ring many times compared with the title holder.

Fuzile has posted three knockout wins from seven fights. Maemu packs a hard right hook to send his foes to the canvas – he has already done that nine times.

However, Fuzile is unperturbed by his rival’s punching power, saying he is in great shape.

“I’m eyeing a world title fight before the end of the year and a win should pave the way for me,” said Fuzile.

But Maemu, who fights out of Soweto, is confident of ­giving a good account of himself.

He is determined to spoil Fuzile’s planned celebrations by winning the match.

“I’ll be fighting before a hostile Eastern Cape crowd. This means I must win by knockout and silence the champion and my critics. I’m in great shape and I’m ready to be crowned the new champion.”

He proved his worth by stopping Prince “Fresh Prince” Ndlovu in the second round to win the African Boxing Union SADC featherweight belt at the Blairgowrie Recreational Centre in Randburg last month.